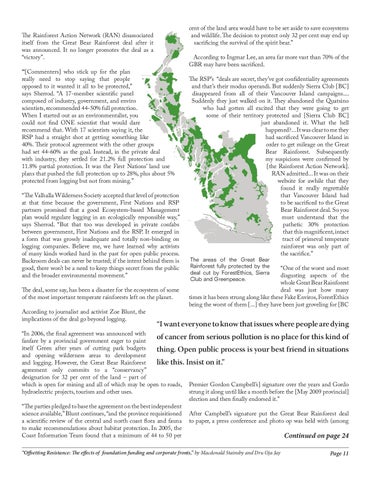 cent of the land area would have to be set aside to save ecosystems and wildlife. The decision to protect only 32 per cent may end up sacrificing the survival of the spirit bear.”

The Rainforest Action Network (RAN) disassociated itself from the Great Bear Rainforest deal after it was announced. It no longer promotes the deal as a “victory”. “‘[Commenters] who stick up for the plan really need to stop saying that people opposed to it wanted it all to be protected,” says Sherrod. “A 17-member scientific panel composed of industry, government, and enviro scientists, recommended 44-50% full protection. When I started out as an environmentalist, you could not find ONE scientist that would dare recommend that. With 17 scientists saying it, the RSP had a straight shot at getting something like 40%. Their protocol agreement with the other groups had set 44-60% as the goal. Instead, in the private deal with industry, they settled for 21.2% full protection and 11.8% partial protection. It was the First Nations’ land use plans that pushed the full protection up to 28%, plus about 5% protected from logging but not from mining.” “The Valhalla Wilderness Society accepted that level of protection at that time because the government, First Nations and RSP partners promised that a good Ecosystem-based Management plan would regulate logging in an ecologically responsible way,” says Sherrod. “But that too was developed in private confabs between government, First Nations and the RSP. It emerged in a form that was grossly inadequate and totally non-binding on logging companies. Believe me, we have learned why activists of many kinds worked hard in the past for open public process. Backroom deals can never be trusted; if the intent behind them is good, there won’t be a need to keep things secret from the public and the broader environmental movement.” The deal, some say, has been a disaster for the ecosystem of some of the most important temperate rainforests left on the planet. According to journalist and activist Zoe Blunt, the implications of the deal go beyond logging.

According to Ingmar Lee, an area far more vast than 70% of the GBR may have been sacrificed. The RSP’s “deals are secret, they’ve got confidentiality agreements and that’s their modus operandi. But suddenly Sierra Club [BC] disappeared from all of their Vancouver Island campaigns.... Suddenly they just walked on it. They abandoned the Quatsino who had gotten all excited that they were going to get some of their territory protected and [Sierra Club BC] just abandoned it. What the hell happened?... It was clear to me they had sacrificed Vancouver Island in order to get mileage on the Great Bear Rainforest. Subsequently my suspicions were confirmed by [the Rainforest Action Network]. RAN admitted... It was on their website for awhile that they found it really regrettable that Vancouver Island had to be sacrificed to the Great Bear Rainforest deal. So you must understand that the pathetic 30% protection that this magnificent, intact tract of primeval temperate rainforest was only part of the sacrifice.” The areas of the Great Bear Rainforest fully protected by the deal cut by ForestEthics, Sierra Club and Greenpeace.

“One of the worst and most disgusting aspects of the whole Great Bear Rainforest deal was just how many times it has been strung along like these Fake Enviros, ForestEthics being the worst of them [...] they have been just groveling for [BC

“I want everyone to know that issues where people are dying

“In 2006, the final agreement was announced with of cancer from serious pollution is no place for this kind of fanfare by a provincial government eager to paint itself Green after years of cutting park budgets thing. Open public process is your best friend in situations and opening wilderness areas to development like this. Insist on it.” and logging. However, the Great Bear Rainforest agreement only commits to a “conservancy” designation for 32 per cent of the land – part of which is open for mining and all of which may be open to roads, Premier Gordon Campbell’s] signature over the years and Gordo hydroelectric projects, tourism and other uses. strung it along until like a month before the [May 2009 provincial] election and then finally endorsed it.” “The parties pledged to base the agreement on the best independent science available,” Blunt continues, “and the province requisitioned After Campbell’s signature put the Great Bear Rainforest deal a scientific review of the central and north coast flora and fauna to paper, a press conference and photo op was held with (among to make recommendations about habitat protection. In 2005, the Coast Information Team found that a minimum of 44 to 50 per Continued on page 24 “Offsetting Resistance: The effects of foundation funding and corporate fronts,” by Macdonald Stainsby and Dru Oja Jay