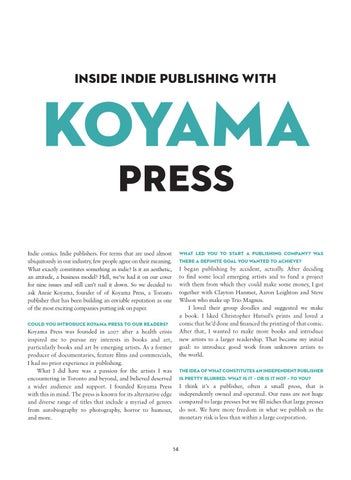 Inside Indie Publishing with

Indie comics. Indie publishers. For terms that are used almost ubiquitously in our industry, few people agree on their meaning. What exactly constitutes something as indie? Is it an aesthetic, an attitude, a business model? Hell, we’ve had it on our cover for nine issues and still can’t nail it down. So we decided to ask Annie Koyama, founder of of Koyama Press, a Toronto publisher that has been building an enviable reputation as one of the most exciting companies putting ink on paper.

What led you to start a publishing company? Was there a definite goal you wanted to achieve?

I began publishing by accident, actually. After deciding to find some local emerging artists and to fund a project with them from which they could make some money, I got together with Clayton Hanmer, Aaron Leighton and Steve Wilson who make up Trio Magnus. I loved their group doodles and suggested we make a book. I liked Christopher Hutsul’s prints and loved a comic that he’d done and financed the printing of that comic. After that, I wanted to make more books and introduce new artists to a larger readership. That became my initial goal: to introduce good work from unknown artists to the world.

Could you introduce Koyama Press to our readers?

Koyama Press was founded in 2007 after a health crisis inspired me to pursue my interests in books and art, particularly books and art by emerging artists. As a former producer of documentaries, feature films and commercials, I had no prior experience in publishing. What I did have was a passion for the artists I was encountering in Toronto and beyond, and believed deserved a wider audience and support. I founded Koyama Press with this in mind. The press is known for its alternative edge and diverse range of titles that include a myriad of genres from autobiography to photography, horror to humour, and more.

The idea of what constitutes an independent publisher is pretty blurred. What is it – or is it not – to you?

I think it’s a publisher, often a small press, that is independently owned and operated. Our runs are not huge compared to large presses but we fill niches that large presses do not. We have more freedom in what we publish as the monetary risk is less than within a large corporation. 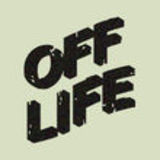 Issue ten of OFF LIFE – the UK's only street press comic magazine.

Issue ten of OFF LIFE – the UK's only street press comic magazine.