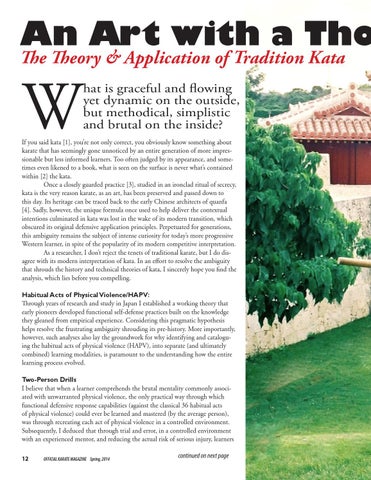 An Art with a Tho The Theory &amp; Application of Tradition Kata

hat is graceful and flowing yet dynamic on the outside, but methodical, simplistic and brutal on the inside?

If you said kata [1], you’re not only correct, you obviously know something about karate that has seemingly gone unnoticed by an entire generation of more impressionable but less informed learners. Too often judged by its appearance, and sometimes even likened to a book, what is seen on the surface is never what’s contained within [2] the kata. Once a closely guarded practice [3], studied in an ironclad ritual of secrecy, kata is the very reason karate, as an art, has been preserved and passed down to this day. Its heritage can be traced back to the early Chinese architects of quanfa [4]. Sadly, however, the unique formula once used to help deliver the contextual intentions culminated in kata was lost in the wake of its modern transition, which obscured its original defensive application principles. Perpetuated for generations, this ambiguity remains the subject of intense curiosity for today’s more progressive Western learner, in spite of the popularity of its modern competitive interpretation. As a researcher, I don’t reject the tenets of traditional karate, but I do disagree with its modern interpretation of kata. In an effort to resolve the ambiguity that shrouds the history and technical theories of kata, I sincerely hope you find the analysis, which lies before you compelling. Habitual Acts of Physical Violence/HAPV: Through years of research and study in Japan I established a working theory that early pioneers developed functional self-defense practices built on the knowledge they gleaned from empirical experience. Considering this pragmatic hypothesis helps resolve the frustrating ambiguity shrouding its pre-history. More importantly, however, such analyses also lay the groundwork for why identifying and cataloguing the habitual acts of physical violence (HAPV), into separate (and ultimately combined) learning modalities, is paramount to the understanding how the entire learning process evolved. Two-Person Drills I believe that when a learner comprehends the brutal mentality commonly associated with unwarranted physical violence, the only practical way through which functional defensive response capabilities (against the classical 36 habitual acts of physical violence) could ever be learned and mastered (by the average person), was through recreating each act of physical violence in a controlled environment. Subsequently, I deduced that through trial and error, in a controlled environment with an experienced mentor, and reducing the actual risk of serious injury, learners 12

The latest from the world of karate and martial arts. 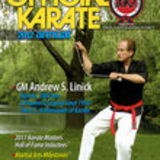