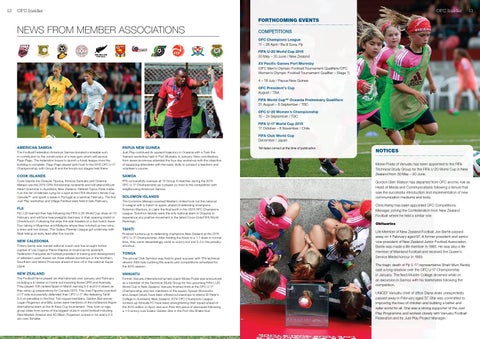 The Football Federation American Samoa donated a sizeable sum in contribution to the construction of a new gym which will service Pago Pago. The federation hopes to launch a futsal league once the building is complete. Pago Pago played joint-host to the 2015 OFC U-17 Championship, with Group B and the knock-out stages held there.

Just Play continued its upward trajectory in Oceania with a Train the Trainers workshop held in Port Moresby in January. Nine coordinators from seven provinces attended the four day workshop with the objective of equipping attendees with the basic skills to conduct a teachers and volunteer’s course.

Cook Islands trio Dwayne Tiputoa, Kimiora Samuels and Owenne Matapo are the 2015 CIFA Scholarship recipients and will attend Mount Albert Grammar in Auckland, New Zealand. Referee Tupou Patia made it on the list of referees vying for a spot at the FIFA Women’s World Cup Canada™ and spent a week in Portugal at a seminar February. The first Just Play workshop and Village Festival were held in late-February.

FFS successfully oversaw all 15 Group A matches during the 2015 OFC U-17 Championship as it played co-host to the competition with neighbouring American Samoa.

FIJI Fiji U-20 learned their fate following the FIFA U-20 World Cup draw on 10 February and will face heavyweights Germany in their opening match in Christchurch. Following the draw the side headed on a five match Asian Tour taking in Myanmar and Malaysia where they notched up two wins, a draw and two losses. The Galaxy Premier League got underway with Nadi taking an early lead after five rounds.

NEW CALEDONIA Thierry Sardo was named national coach and has brought former captain of Les Cagous Pierre Wajoka on board as his assistant. Fédération Française de Football president of training and development of referees Lucien Kaiser ran three referee workshops in the Northern, Sourthern and Island Provinces ahead of kick-off in the national Super Ligue.

SOLOMON ISLANDS The Commins Menapi coached Western United took out the national S-League with a match to spare, ahead of defending champions Solomon Warriors, to claim the final berth in the 2015 OFC Champions League. Solomon Islands were the only national team in Oceania to experience any positive movement in the latest Coca-Cola/FIFA World Rankings.

TAHITI Finished runners-up to defending champions New Zealand at the 2015 OFC U-17 Championship. After holding the Kiwis to a 1-1 draw in normal time, they came devastatingly close to victory but lost 5-4 in the penaltyshootout.

TONGA The annual Club Seminar was held to great success with TFA technical director Kilifi Uele outlining the events and competitions scheduled for the 2015 season.

The Football Ferns played six internationals over January and February including a tri-series on home soil involving Korea DPR and Australia. They played 15th ranked Spain in March earning 2-2 and 0-0 draws as they ramp up preparations for Canada 2015. The Jose Figueira coached U-17 side successfully defended their OFC U-17 title defeating Tahiti 5-4 on penalties in the final. Two squad members, Golden Ball winner Logan Rogerson and Billy Jones were members of the invitational Aspire International team at the Al Kass Cup tournament. They took on agegroup sides from some of the biggest clubs in world football including Real Madrid, Arsenal and AC Milan. Rogerson scored in his side’s 2-0 win over Schalke.

Former Vanuatu international turned coach Moise Poida was announced as a member of the Technical Study Group for the upcoming FIFA U-20 World Cup in New Zealand. Vanuatu finished third at the OFC U-17 Championship and two members of the squad, Sylvain Worworbu and Joseph Iaruel, have been offered scholarships to attend St Peter’s College in Auckland, New Zealand. 2014 OFC Champions League runners-up Amicale FC have been strengthening their squad ahead of the 2015 edition in April, and won their first piece of silverware folllowing a 1-0 victory over Erakor Golden Star in the Port Vila Shield final.

*All dates correct at the time of publication

NOTICES Moise Poida of Vanuatu has been appointed to the FIFA Technical Study Group for the FIFA U-20 World Cup in New Zealand from 30 May – 20 June. Gordon Glen Watson has departed from OFC and his role as Head of Media and Communications following a tenure that saw the successful introduction and implementation of new communication mediums and tools. Chris Kemp has been appointed OFC Competitions Manager, joining the Confederation from New Zealand Football where he held a similar role. Obituaries Life Member of New Zealand Football Joe Bartle passed away on 4 February aged 97. A former president and senior vice-president of New Zealand Junior Football Association, Bartle was made a life member in 1985. He was also a life member of Mainland Football and received the Queen’s Service Medal honour in 1989. The tragic death of Fiji U-17 representative Shalit Muni Reddy cast a long shadow over the OFC U-17 Championship in January. The Nadi Muslim College drowned while on an excursion in Samoa with his teammates following the competition. UNICEF Vanuatu chief of office Diane Araki unexpectedly passed away in February aged 57. She was committed to improving the lives of children and building a better and safer world for all. She was a strong supporter of the Just Play Programme and worked closely with Vanuatu Football Federation and its Just Play Project Manager. 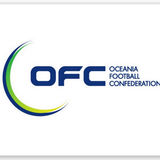 New Zealand triumph in a penalty shoot-out to claim the regional U-17 crown and we look ahead to the 2015 OFC Champions League.

New Zealand triumph in a penalty shoot-out to claim the regional U-17 crown and we look ahead to the 2015 OFC Champions League.