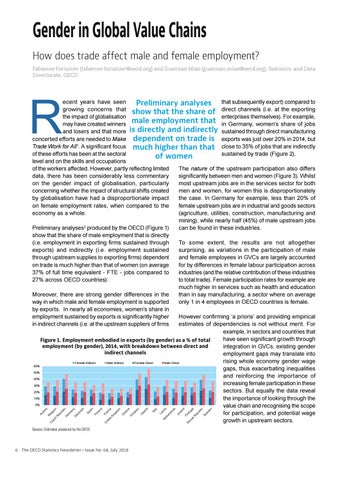 ecent years have seen Preliminary analyses that subsequently export) compared to growing concerns that show that the share of direct channels (i.e. at the exporting the impact of globalisation enterprises themselves). For example, male employment that in Germany, women’s share of jobs may have created winners and losers and that more is directly and indirectly sustained through direct manufacturing concerted efforts are needed to Make dependent on trade is exports was just over 20% in 2014, but Trade Work for All1. A significant focus much higher than that close to 35% of jobs that are indirectly of these efforts has been at the sectoral sustained by trade (Figure 2). of women level and on the skills and occupations The nature of the upstream participation also differs of the workers affected. However, partly reflecting limited significantly between men and women (Figure 3). Whilst data, there has been considerably less commentary most upstream jobs are in the services sector for both on the gender impact of globalisation, particularly men and women, for women this is disproportionately concerning whether the impact of structural shifts created the case. In Germany for example, less than 20% of by globalisation have had a disproportionate impact female upstream jobs are in industrial and goods sectors on female employment rates, when compared to the (agriculture, utilities, construction, manufacturing and economy as a whole. mining), while nearly half (45%) of male upstream jobs can be found in these industries. Preliminary analyses2 produced by the OECD (Figure 1) show that the share of male employment that is directly To some extent, the results are not altogether (i.e. employment in exporting firms sustained through surprising, as variations in the participation of male exports) and indirectly (i.e. employment sustained and female employees in GVCs are largely accounted through upstream supplies to exporting firms) dependent for by differences in female labour participation across on trade is much higher than that of women (on average industries (and the relative contribution of these industries 37% of full time equivalent - FTE - jobs compared to to total trade). Female participation rates for example are 27% across OECD countries). much higher in services such as health and education than in say manufacturing, a sector where on average Moreover, there are strong gender differences in the only 1 in 4 employees in OECD countries is female. way in which male and female employment is supported by exports. In nearly all economies, women’s share in However confirming ‘a prioris’ and providing empirical employment sustained by exports is significantly higher estimates of dependencies is not without merit. For in indirect channels (i.e. at the upstream suppliers of firms example, in sectors and countries that have seen significant growth through Figure 1. Employment embodied in exports (by gender) as a % of total employment (by gender), 2014, with breakdown between direct and integration in GVCs, existing gender indirect channels employment gaps may translate into rising whole economy gender wage Female Indirect Male Indirect Female Direct Male Direct 60% gaps, thus exacerbating inequalities 50% and reinforcing the importance of 40% increasing female participation in these 30% sectors. But equally the data reveal 20% 10% the importance of looking through the 0% value chain and recognising the scope for participation, and potential wage growth in upstream sectors. Source: Estimates produced by the OECD

For the extended OECD statistical network 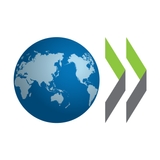