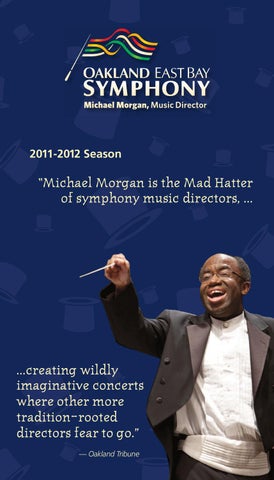 “Michael Morgan is the Mad Hatter of symphony music directors, …

“The most fun-loving symphony in the country.” — Oakland Tribune

Great Subscriber Benefits • Big Savings – Up to 31% over cost of single tickets. It’s almost like getting a concert for free!

• Priority Seat Selection – Opportunity to renew early and upgrade before tickets go on sale to the public.

them at no charge.

• Can’t attend a concert? Only subscribers can exchange tickets for a future concert at no charge.

Free Talks Before Concerts Add to your enjoyment of the concert by attending an entertaining, informative talk beginning one hour before each subscription concert. Well-known Bay Area musician and speaker John Kendall Bailey will offer his insights into the music being performed, sometimes joined by a composer or artist involved in the evening’s program.

The Paramount Theatre, home of Oakland East Bay Symphony, is one of the finest, most admired examples of art deco design in the United States. Restored to its original splendor, meticulously maintained and fully upgraded to modern technical standards, the theatre is a National Historical Landmark. Located at Broadway and 21st Street in downtown Oakland, the Paramount is easily accessible by public transportation and by car. BART: 19th Street Oakland station is just steps from the theatre. AC Transit: Buses on the #51 and other lines stop across the street. Parking: Covered parking lot adjacent to the theatre, as well as other parking facilities in the immediate area.

Connect with us on

Hospitality Sponsor: Woodfin Hotel Emeryville Season Official Caterer: Devoted Catering by Amiee Alan The 2011-2012 season is supported in part by grants from the National Endowment for the Arts, the California Arts Council, the Alameda County Arts Commission, the Oakland City Council, and the City of Oakland’s Cultural Funding Program.

Join us for Opening Night as we celebrate the rich, vibrant tradition of

American music. We’ll start with the captivating swing of Duke Ellington’s hopeful, forward-looking New World A-Comin’. The bubbly exuberance of Gershwin’s American in Paris captures the delight and wonder of an American visitor taking in the sights and sounds of Paris for the first time. We’re pleased to bring back the extraordinary pianist Sara Davis Buechner for a performance of Bernstein’s searching “Age of Anxiety,” an unusual symphony featuring solo piano. Sara’s powerful performance with OEBS in 2009 was a highlight of that season. We’ll also pay tribute to our neighbors south of the border with Alberto Ginastera’s wildly popular Estancia, a lively work incorporating themes from Argentinean cowboy music. (Suitable for children 10 and over.)

“[Buechner] played with fire and sparkle, her tone crisp and forceful. The big crowd gave her a long, heartfelt standing ovation.”

Few works have achieved the iconic status of Carl Orff’s Carmina Burana. It is one

of the most recognizable and frequently performed choral works in the Western classical tradition. Based on a collection of medieval, secular Latin poetry discovered in 1803 at a Bavarian monastery, the text for Carmina Burana is often colorful, bawdy and humorous. The poems deal with love and sex, drinking and gambling, with the overall theme that in life and love, man is but a pawn of fate. Our soloists in this spectacular piece are three rising stars in the opera world. We’ll also be joined by the Oakland Symphony Chorus and Oakland Youth Orchestra to celebrate the recent merger of our three organizations to form the newly created East Bay Performing Arts.

(Suitable for children 10 and over.)

musicians whose careers were prematurely terminated by the rise of the Nazi regime. Czech composer and pianist Erwin Schulhoff, who died in the Wülzburg concentration camp, was one of the first classical composers in Europe to be inspired by jazz. We’ll present his rarely performed Suite for Chamber Orchestra. Mieczyslaw Weinberg had a remarkable life; he lost most of his family in the Holocaust but survived the torments of two brutal dictatorships himself. He fled the German occupation of Poland in 1939, only to fall victim to Stalin’s post-war campaign against the Jews. He was released after years of imprisonment, and later created one of the finest trumpet concertos ever written. OEBS Principal Trumpet William Harvey is the featured soloist in this inspiring work. Beethoven’s third Symphony, now known as the “Eroica”, was originally written in honor of Napoleon and titled “Bonaparte”. However, when William Harvey Napoleon declared himself Emperor in 1804, Beethoven was enraged and changed the name of his symphony. Besides the famous story of its rededication, the “Eroica” is known as one of Beethoven’s most challenging masterpieces – long, technically demanding and sublime. (Suitable for children 10 and over.)

of art songs.” Words and music are inextricably linked for this prolific Pulitzer Prize-winning American composer, whose musical and literary ventures include symphonies, operas, choral works and songs as well as books, diaries and essays. Rorem’s Letters from Paris combines the gently tonal music for which he is known with the witty slightly risqué texts for which he is equally famous. Hailed as an “absolute wonder” by the Kansas City Star, Andrew Sords Andrew Sords is establishing himself as one of the preeminent new faces of classical violin. He makes his debut with OEBS playing one of the greatest concertos ever written, Brahms’ richly harmonic Violin Concerto. We’ll open the program with Schubert’s delightful Overture in C Major, the more popular of the two overtures he wrote in the Italian style. (Suitable for children 12 and over.)

young cellists. The first prize winner of numerous prestigious awards (including the Naumburg International Competition), Requiro makes his OEBS debut playing Dvorák’s Cello Concerto, written during the composer’s final year in New York. One of Dvorák’s greatest masterpieces, the cello concerto is warm, lyrical and passionate. Dvorák’s friend and mentor, Johannes Brahms, who corrected the proofs and knew the work intimately, is reported to have said: “Why on earth didn’t I know that one could write a cello concerto like this? If I had only known, I would have written one long ago!” Also on the program will be works by Filipino composers, including a new work by a Filipino jazz composer commissioned by OEBS.

(Suitable for children 10 and over.)

“Look for [Requiro] to be a musical leader of the future.”

Daniel Bernard Roumain Bernard Roumain blends his Haitian roots with classical and techno textures and a vibrant musical imagination in Voodoo Violin Concerto. Proving that he is “about as omnivorous as a contemporary artist gets” (New York Times), this innovative composer, performer and band leader has played everywhere from Carnegie Hall to American Idol, where he recently performed with Lady Gaga. Bay Area native and musical prodigy Taylor Eigsti, now based in New York, returns home to present the World Premiere of a work he’s writing for jazz piano and orchestra. Recognized by critics internationally for his unique touch and Taylor Eigsti rhythmic control, Eigsti already has several best-selling CDs and two Grammy nominations under his belt at the age of 26. Jazz vocalist Paula West, known for her heartfelt renditions of well-known standards and unique interpretations of dynamic jazz songs, will delight us with a set backed by the orchestra. (Suitable for children 10 and over.) Paula West

There’s no better way to get in the holiday spirit than by coming to Let Us Break Bread Together, now a beloved Bay Area seasonal tradition. Join us for inspiring performances of gospel music, classical selections, holiday favorites and sing-alongs. Joan Baez This year’s concert will feature a special guest appearance by legendary folk singer Joan Baez, who is delighted to be able to join us after having to withdraw from last year’s concert due to an injury. Bring some friends, bring the family or come on your own – you’re sure to have a great time! Note: This concert is not part of the regular subscription series; tickets must be ordered separately.

(Suitable for children 4 and over.)

Five Ways to Order By Mail

2. How many concerts do you want in your subscription?

1. How many subscriptions do you want?

(Refer to prices on the facing page.)

Payment by: ❑ Check, payable to Paramount Theatre OR Charge my ❑ VISA

“Canny planning in programming is an acknowledged hallmark of the Morgan tenure, and that trademark blending of the edgy and unusual with stalwart standards.” 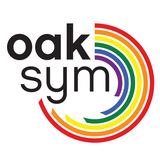