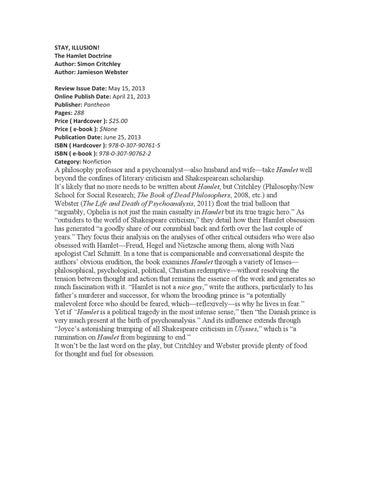 A philosophy professor and a psychoanalyst—also husband and wife—take Hamlet well beyond the confines of literary criticism and Shakespearean scholarship. It’s likely that no more needs to be written about Hamlet, but Critchley (Philosophy/New School for Social Research; The Book of Dead Philosophers, 2008, etc.) and Webster (The Life and Death of Psychoanalysis, 2011) float the trial balloon that “arguably, Ophelia is not just the main casualty in Hamlet but its true tragic hero.” As “outsiders to the world of Shakespeare criticism,” they detail how their Hamlet obsession has generated “a goodly share of our connubial back and forth over the last couple of years.” They focus their analysis on the analyses of other critical outsiders who were also obsessed with Hamlet—Freud, Hegel and Nietzsche among them, along with Nazi apologist Carl Schmitt. In a tone that is companionable and conversational despite the authors’ obvious erudition, the book examines Hamlet through a variety of lenses— philosophical, psychological, political, Christian redemptive—without resolving the tension between thought and action that remains the essence of the work and generates so much fascination with it. “Hamlet is not a nice guy,” write the authors, particularly to his father’s murderer and successor, for whom the brooding prince is “a potentially malevolent force who should be feared, which—reflexively—is why he lives in fear.” Yet if “Hamlet is a political tragedy in the most intense sense,” then “the Danish prince is very much present at the birth of psychoanalysis.” And its influence extends through “Joyce’s astonishing trumping of all Shakespeare criticism in Ulysses,” which is “a rumination on Hamlet from beginning to end.” It won’t be the last word on the play, but Critchley and Webster provide plenty of food for thought and fuel for obsession.