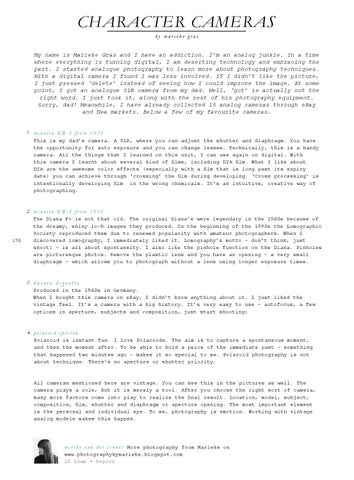 My name is Marieke Gras and I have an addiction. I’m an analog junkie. In a time where everything is turning digital, I am deserting technology and embracing the past. I started analogue photography to learn more about photography techniques. With a digital camera I found I was less involved. If I didn’t like the picture, I just pressed ‘delete’ instead of seeing how I could improve the image. At some point, I got an analogue SLR camera from my dad. Well, ‘got’ is actually not the right word. I just took it, along with the rest of his photography equipment. Sorry, dad! Meanwhile, I have already collected 15 analog cameras through eBay and flea markets. Below a few of my favourite cameras. 1. minolta XE-5 from 1975 This is my dad’s camera. A SLR, where you can adjust the shutter and diaphragm. You have the opportunity for auto exposure and you can change lenses. Technically, this is a handy camera. All the things that I learned on this unit, I can use again on digital. With this camera I learnt about several kind of films, including DIA film. What I like about DIA are the awesome color effects (especially with a film that is long past its expiry date) you can achieve through ‘crossing’ the film during developing. ‘Cross processing’ is intentionally developing film in the wrong chemicals. It’s an intuitive, creative way of photographing.

2. minolta XE-5 from 1975 The Diana F+ is not that old. The original Diana’s were legendary in the 1960s because of the dreamy, shiny lo-fi images they produced. In the beginning of the 1990s the Lomographic Society reproduced them due to renewed popularity with amateur photographers. When I discovered lomography, I immediately liked it. Lomography’s motto - don’t think, just shoot! - is all about spontaneity. I also like the pinhole function on the Diana. Pinholes are picturesque photos. Remove the plastic lens and you have an opening - a very small diaphragm - which allows you to photograph without a lens using longer exposure times. 3. dacora dignette Produced in the 1960s in Germany. When I bought this camera on eBay, I didn’t know anything about it. I just liked the vintage feel. It’s a camera with a big history. It’s very easy to use - autofocus, a few options in aperture, subjects and composition… just start shooting! 4. polaroid spectra Polaroid is instant fun. I love Polaroids. The aim is to capture a spontaneous moment, and then the moment after. To be able to hold a peice of the immediate past – something that happened two minutes ago - makes it so special to me. Polaroid photography is not about technique. There’s no aperture or shutter priority. All cameras mentioned here are vintage. You can see this in the pictures as well. The camera plays a role, but it is merely a tool. After you choose the right sort of camera, many more factors come into play to realize the final result. Location, model, subject, composition, film, shutter and diaphragm or aperture opening. The most important element is the personal and individual eye. To me, photography is emotion. Working with vintage analog models makes this happen. Completely conceptualized and realized by a group of 30 students of the Amsterdam Fashion Institute, Odd magazine explores six connections b...

Completely conceptualized and realized by a group of 30 students of the Amsterdam Fashion Institute, Odd magazine explores six connections b...