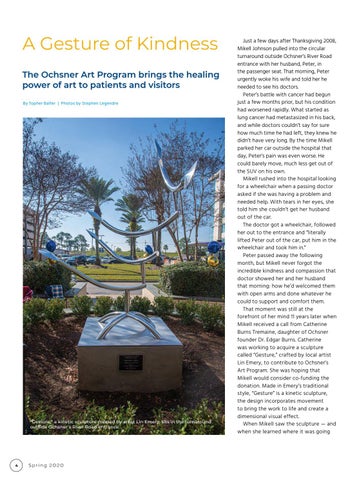 Just a few days after Thanksgiving 2008, Mikell Johnson pulled into the circular turnaround outside Ochsner’s River Road entrance with her husband, Peter, in the passenger seat. That morning, Peter urgently woke his wife and told her he needed to see his doctors. Peter’s battle with cancer had begun just a few months prior, but his condition had worsened rapidly. What started as lung cancer had metastasized in his back, and while doctors couldn’t say for sure how much time he had left, they knew he didn’t have very long. By the time Mikell parked her car outside the hospital that day, Peter’s pain was even worse. He could barely move, much less get out of the SUV on his own. Mikell rushed into the hospital looking for a wheelchair when a passing doctor asked if she was having a problem and needed help. With tears in her eyes, she told him she couldn’t get her husband out of the car. The doctor got a wheelchair, followed her out to the entrance and “literally lifted Peter out of the car, put him in the wheelchair and took him in.” Peter passed away the following month, but Mikell never forgot the incredible kindness and compassion that doctor showed her and her husband that morning: how he’d welcomed them with open arms and done whatever he could to support and comfort them. That moment was still at the forefront of her mind 11 years later when Mikell received a call from Catherine Burns Tremaine, daughter of Ochsner founder Dr. Edgar Burns. Catherine was working to acquire a sculpture called “Gesture,” crafted by local artist Lin Emery, to contribute to Ochsner’s Art Program. She was hoping that Mikell would consider co-funding the donation. Made in Emery’s traditional style, “Gesture” is a kinetic sculpture, the design incorporates movement to bring the work to life and create a dimensional visual effect. When Mikell saw the sculpture — and when she learned where it was going