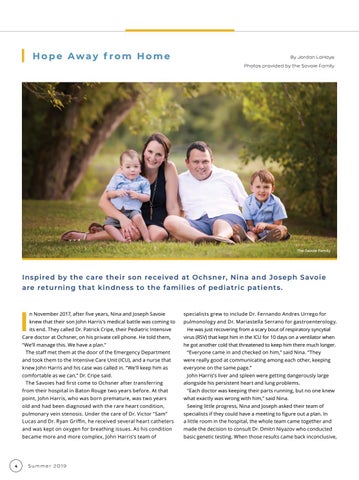 By Jordan LaHaye Photos provided by the Savoie Family

Inspired by the care their son received at Ochsner, Nina and Joseph Savoie are returning that kindness to the families of pediatric patients.

specialists grew to include Dr. Fernando Andres Urrego for

its end. They called Dr. Patrick Cripe, their Pediatric Intensive

he got another cold that threatened to keep him there much longer.

The staff met them at the door of the Emergency Department

“Everyone came in and checked on him,” said Nina. “They

and took them to the Intensive Care Unit (ICU), and a nurse that

were really good at communicating among each other, keeping

knew John Harris and his case was called in. “We’ll keep him as

everyone on the same page.”

comfortable as we can,” Dr. Cripe said. The Savoies had first come to Ochsner after transferring from their hospital in Baton Rouge two years before. At that point, John Harris, who was born premature, was two years old and had been diagnosed with the rare heart condition,

He was just recovering from a scary bout of respiratory syncytial

Care doctor at Ochsner, on his private cell phone. He told them,

John Harris’s liver and spleen were getting dangerously large alongside his persistent heart and lung problems. “Each doctor was keeping their parts running, but no one knew what exactly was wrong with him,” said Nina. Seeing little progress, Nina and Joseph asked their team of

pulmonary vein stenosis. Under the care of Dr. Victor “Sam”

specialists if they could have a meeting to figure out a plan. In

a little room in the hospital, the whole team came together and

and was kept on oxygen for breathing issues. As his condition

made the decision to consult Dr. Dmitri Niyazov who conducted

basic genetic testing. When those results came back inconclusive,