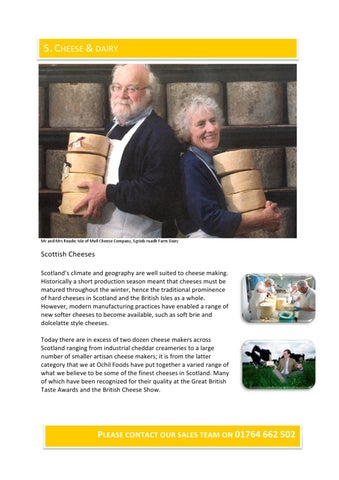 Scottish Cheeses Scotlandâ&#x20AC;&#x2122;s climate and geography are well suited to cheese making. Historically a short production season meant that cheeses must be matured throughout the winter, hence the traditional prominence of hard cheeses in Scotland and the British Isles as a whole. However, modern manufacturing practices have enabled a range of new softer cheeses to become available, such as soft brie and dolcelatte style cheeses. Today there are in excess of two dozen cheese makers across Scotland ranging from industrial cheddar creameries to a large number of smaller artisan cheese makers; it is from the latter category that we at Ochil Foods have put together a varied range of what we believe to be some of the finest cheeses in Scotland. Many of which have been recognized for their quality at the Great British Taste Awards and the British Cheese Show.

Dunsyre Blue, Round, made from unpasteurised cow

Lanark Blue, half blue, made from unpasteurised Ewes Milk, by HJ Erringon, Lanarkshire

Caboc, as above covered in oats

Kenmore Oatcakes & Tablet Keith and Sheila Mitchell from their small bakery in Kenmore, Loch Tay have been hand making Oatcakes and Tablet for us for the past 15 years. They are hugely popular and have been recognised with gold stars at the last 4 great taste awards. Kenmore Handmade Oatcakes

Below is a selection of international cheeses that we carry in stock, should you wish us to carry any other cheeses please ask. soft and semi soft cheeses French brie 60% pasteurised, mild creamy

cheese from the Jura region of the Swiss Alpes

Cheese to order – extensive range of over 1000 cheeses Through our partners in the UK and abroad we are proud to offer you a selection over 1000 cheeses from all over the UK, Europe and the rest of the world. Due to shelf life issues we are unable to stock everything. However, if you could let us know before 11am on a Friday we can deliver to you on the following Wednesday (or nearest delivery date). In order to inspire you below is a varied list of some of best on offer.

Tor, Ash Pyramid with geotrichum rind made in Somerset by Peter Humphreys

Brie de Meaux, ¾ matured st luc the most famous of brie has its own AOC status Scotland’s climate and geography are well suited to cheese making. Historically a short production season meant that cheeses must be matured...

Scotland’s climate and geography are well suited to cheese making. Historically a short production season meant that cheeses must be matured...