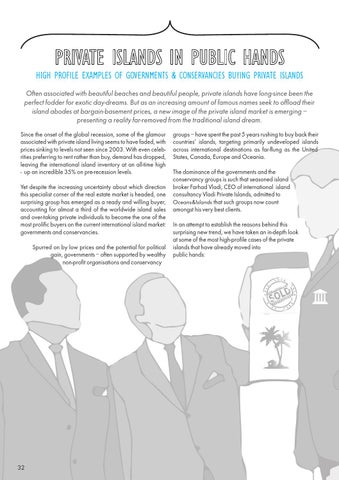 HIGH PROFILE EXAMPLES OF GOVERNMENTS &amp; CONSERVANCIES BUYING PRIVATE ISLANDS Often associated with beautiful beaches and beautiful people, private islands have long-since been the perfect fodder for exotic day-dreams. But as an increasing amount of famous names seek to offload their island abodes at bargain-basement prices, a new image of the private island market is emerging – presenting a reality far-removed from the traditional island dream. Since the onset of the global recession, some of the glamour associated with private island living seems to have faded, with prices sinking to levels not seen since 2003. With even celebrities preferring to rent rather than buy, demand has dropped, leaving the international island inventory at an all-time high - up an incredible 35% on pre-recession levels. Yet despite the increasing uncertainty about which direction this specialist corner of the real estate market is headed, one surprising group has emerged as a ready and willing buyer, accounting for almost a third of the worldwide island sales and over-taking private individuals to become the one of the most prolific buyers on the current international island market: governments and conservancies. Spurred on by low prices and the potential for political gain, governments – often supported by wealthy non-profit organisations and conservancy

groups – have spent the past 5 years rushing to buy back their countries’ islands, targeting primarily undeveloped islands across international destinations as far-flung as the United States, Canada, Europe and Oceania. The dominance of the governments and the conservancy groups is such that seasoned island broker Farhad Vladi, CEO of international island consultancy Vladi Private Islands, admitted to Oceans&amp;Islands that such groups now count amongst his very best clients. In an attempt to establish the reasons behind this surprising new trend, we have taken an in-depth look at some of the most high-profile cases of the private islands that have already moved into public hands:

The new e-magazine Oceans & Islands combines insights into exemplary marine management with news and stories from the world of private islands, placing the most important issues of island life within a broader context of responsible marine management. 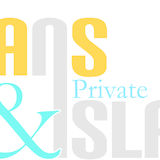