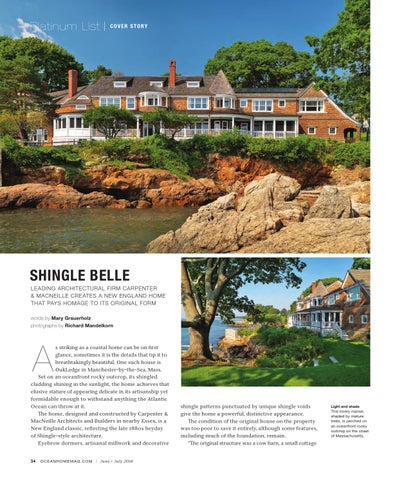 s striking as a coastal home can be on first glance, sometimes it is the details that tip it to breathtakingly beautiful. One such house is OakLedge in Manchester-by-the-Sea, Mass. Set on an oceanfront rocky outcrop, its shingled cladding shining in the sunlight, the home achieves that elusive stature of appearing delicate in its artisanship yet formidable enough to withstand anything the Atlantic Ocean can throw at it. The home, designed and constructed by Carpenter & MacNeille Architects and Builders in nearby Essex, is a New England classic, reflecting the late 1880s heyday of Shingle-style architecture. Eyebrow dormers, artisanal millwork and decorative 34

shingle patterns punctuated by unique shingle voids give the home a powerful, distinctive appearance. The condition of the original house on the property was too poor to save it entirely, although some features, including much of the foundation, remain. â&#x20AC;&#x153;The original structure was a cow barn, a small cottage

This lovely manse, shaded by mature trees, is perched on an oceanfront rocky outcrop on the coast of Massachusetts. 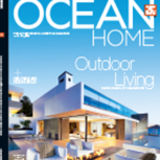