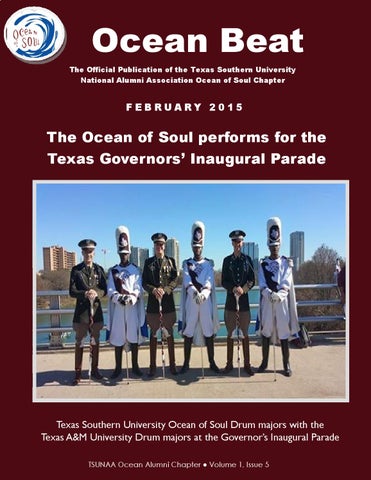 The Ocean of Soul performs for the Texas Governors’ Inaugural Parade

Letter from the President draft As we celebrate into Black History Month, we must remember that we should never forget our past and strive to preserve our past. After a successful Installation Ceremony and first meeting, we are excited with anticipation that we are going to have a successful year. Alumni members were full of ideas and are ready to get to work making our Alumni Association a model for others to follow. For those of you who missed our initial meeting, we look forward to meeting and working with you in the future.

Construction is well underway on the $41.5 million, 215,000-square-foot New Student Resident Housing Complex. Houston-based architectural firm Harrison Kornberg – in collaboration with Lord, Aeck, Sargent – were awarded the contract to design the seven-story building that will include social and study areas on all residential floors. Other amenities include: a dining hall, locker storage, a laundry on all residential floors, a convenience store, roof terrace and a gaming area. The rooms are double occupancy with a shared restroom. Pepper-Lawson Construction/ Horizon International Group started the project on February 28, 2014 and is expected to complete construction in August 2015. The 800-bed facility will allow Texas Southern to house nearly all of its incoming freshmen on campus. Currently, the university has six student housing complexes: Urban Academic Village, Lanier East, Lanier West, University Courtyard, Tierwester I and Tierwester II. There are 1,300 students living in campus housing. Reprinted from D-Mars Magazine

The Ocean of Soul performing in the Houston Astrodome

Alumni Spotlight The Soul Rebels started with an idea shared between founding members Derrick Moss and Lumar LeBlanc – to play the music they loved on the radio in the New Orleans Brass Band tradition that they grew up on. Together with a group of young, like-minded players from all over New Orleans, they formed the Soul Rebels and set out to make their mark on the music they love. The band came to be when LeBlanc and Moss met as percussionists in New Orleans’ iconic Dejean’s Young Olympia Brass Band. The two were steeped in the fundamentals of New Orleans jazz, but inevitably, contemporary styles of music began to catch their attention. “We wanted to

make our own sound without disrespecting the brass tradition,” LeBlanc recalls, “so we knew we had to break away.” They found a new direction when they spun off and formed their own band and set out to make the music they wanted to make. Graduates of university music programs throughout the South, the group took the marching band format they had learned in school and incorporated influences from outside the city as well as R&amp;B, funk and hip-hop – especially through half-sung, half rapped lyrics On their travels, the Soul Rebels shared the stage with notable artists from

many corners of the music world, including Metallica, Green Day, Maceo Parker, Galactic, Karl Denson, Slick Rick, Suzanne Vega and David A. Stewart of the Eurythmics, as well as billings with Kanye West, Snoop Dogg, Arcade Fire, Alabama Shakes, Estelle, Seal, Cee Lo Green, and Dr. John among others. The Soul Rebels have been a mainstay at festivals all over the world. From the Bonnaroo main stage and the New Orleans Jazz and Heritage Festival, to Electric Forest and the Antibes Jazz Festival, to recent festival appearances at the Perth International Jazz Festival in Australia and the Java Jazz Festival in Jakarta.

Ocean Alumni Mervin Campbell, Curtis Watson and Emmanuel Steib were part of the original members of The Soul Rebels

Listen to all TSU Basketball games live on KTSU-FM 90.9

Texas Southern University National Alumni Association Ocean of Soul Chapter The purpose of The Ocean of Soul Alumni Association is to uplift and preserve the strong traditions and legacy of the historic Texas Southern University Ocean of Soul Marching Band. We will do this through financial and physical support, social and political networking among alumni, undergraduate and “friends of the Ocean” and assisting potential and current students involved in the university band program