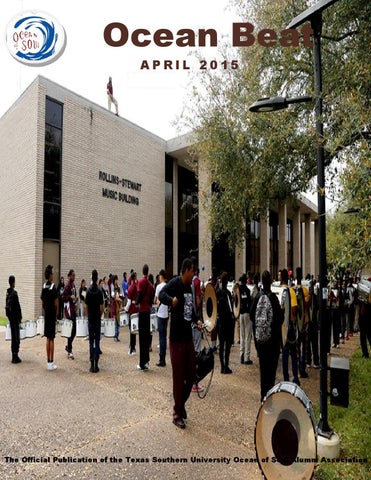 TSUOOSAAA volunteering at The Power Camp

Alumni who pay their dues will receive the following: * An Active Membership ID card * Alumni T– Shirt * 25 % discount off all OSAA Activities (with membership card)

Texas Southern University President Dr. John M. Rudley officially named veteran administrator Dr. James W. Ward as Provost and Vice President for Academic Affairs and Research during the Board of Regents annual retreat on March 7, 2015. He served as interim in this role since May 12, 2014. Prior to this appointment Dr. Ward served as Dean of the School of Communication. This appointment becomes effective immediately. Dr. Ward has had a lifelong commitment to TSU. Hailing from Homer, Louisiana, he began his TSU career as a student in 1970 and has, through years of hard work and constant personal development, worked himself into second in command at his alma mater. As Dean of the School of Communication for nine (9) years, the school of had the largest percentage of students to graduate on time. The school’s graduates are working in every field imaginable - from producers of movies and shows; to publicist at major media networks, to law enforcement to judges and writers. He credits this success to a team of dedicated faculty and staff and having a student centered environment. Dr. Ward states, “I argued early during my administration to maintain, monitor and operate student labs and that my team would be readily and always accessible to the students. On any given day, more than 90 percent (90%) of the students can be found utilizing the labs in the MLK Center throughout the day.” Ward said he will continue to meet with strategic groups, delivering his drive to succeed with the ultimate vision of the president. He plans to blend TSU’s rich history with its present ensuring its vibrant future. “And TSU’s future is promising and I will be working toward that end to position TSU in a global and far-reaching arena where people will know TSU by its expert faculty, and the quality of our programs and our products, the students.” TSUNAA OCEAN ALUMNI CHAPTER ● VOLUME 1, ISSUE 6 T S U N A A O CT SE U AO N OASLAUAM N ● I VCOHL A U PMTEE R1 ,● I SVSOU LEU 7M E 1 , I S S U E 6

The Ocean of Soul performing in Baton Rouge in 1985

She has been named “First Lady of the Flute” by the critics and listeners alike and, from the accomplishments in her musical career, deservedly so. For three decades now, Bobbi Humphrey has been playing her special brand of music to audiences around the world. Her professional career began in 1971 when she was the first female signed to Blue Note Records. Born in Marlin, Texas and raised in Dallas, Humphrey’s training on flute began in high school and continued through her years at Texas Southern University and Southern Methodist University. It was there that Dizzy Gillespie spotted her when he served as a judge in a school-wide competition . With Gillespie encouraging her to pursue a career in New York City, Humphrey wrote a letter to New York’s famed Apollo Theatre and received a telegram soon afterwards telling her, “We have reserved a spot for you on Amateur Night”. She didn’t take further convincing , nor did she have trouble finding her “spot” in the music industry. The title of one of her Epic LPs The Good Life, best describes her career. Humphrey has played with the best, ranging from Duke Ellington (her third day in New York) to Lee Morgan to Stevie Wonder (featured on Songs In The Key of Life LP in 1977). Between 1971 and 1976, Bobbi recorded six albums for Blue Note Records. In 1974, she recorded the successful Satin Doll LP. As the beat went on, the nineties’ held the promise of some of Bobbi’s greatest musical and commercial expansion. In 1990 her company Bobbi Humphrey Music, Inc., signed a production agreement with Warner Bros. Records, in which she brought new artists to the label and produced new material. Her agreement with Warner Bros. followed her discovering, and bringing to the attention of Warner Bros. A&R executives, R & B vocalist Tevin Campbell. Following the success of Bobbi Humphrey Music selling in excess of five million units of the Campbell records, Ms. Humphrey boldly launched her label, Paradise Sounds Records, in 1994.

GET INVOLVED The OSAA has a committee that could use your skill and expertise. Please send your contact information to the Committee Chairs listed below, and we will send you more information on meeting dates and planned activities. Fundraising Committee Contact: Nita Williams nah823@aol.com The principal responsibility of the Fundraising Committee is to ensure the success of the OOSAA Operations and Ronald B. Thornton Scholarship Funds. Working together the Fundraising Committee oversees the solicitation of gifts from alumni, sets fundraising policy and provides advice to the OOSAA Board on implementation of these policies. The Fundraising Committee also sets annual fundraising goals and objectives, and monitors progress toward the achievement of these goals. Ocean Mentorship and Retention Committee Contact: Joselyn Coats Jayone_99@yahoo.com The Student Mentor Program Committee oversees the program that pairs students with mentors for an optimal experience during their undergraduate years. Students get support and advice regarding coursework, time management and career opportunities. Mentors can share their expertise and ease the way for their mentees. Ocean Recruiting Committee Pam Scott Pamela_scott14@yahoo.com The Ocean Recruiting Committee will assist the band directors in recruiting efforts for band and will collaborate with the Recruitment and Admissions departments in identifying students eligible for the band. Fellowship Committee Khary Boykins bkhary@hotmail.com The purpose of the Fellowship/Social Committee is to handle arrangements for any OOSAA social gathering, such as parties, the awards banquet and other social events as voted upon and within a budget determined by the board. They find and hire caterers, plan menus, oversee setup and cleanup of all social events.

History and Traditions Committee Leonard Faniuel lpfaniuel@yahoo.com This committee seeks to develop an appreciation of the Bands history and traditions among students, alumni, and friends of the Ocean of Soul Marching Band . The committee's projects include the Ocean Time Capsule and the new publication, Ocean Beat which offers a historical tour of the Ocean of Soul showcasing its rich past and the growth and change of the University Band over the years. Publications Committee Donald Black donaldblack23@yahoo.com The Publications Committee shall review, all alumni communications including Ocean Beat, Ocean Newsflash, OOSAA Announcements, delivered in print and recommend changes and improvements where needed.