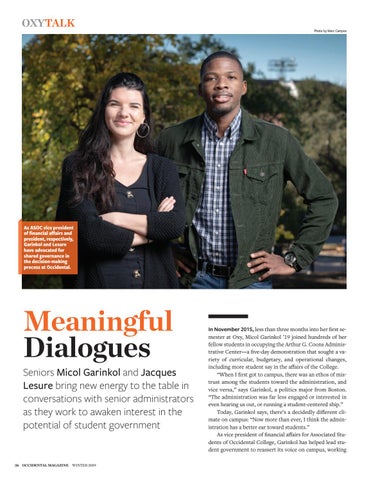 As ASOC vice president of ﬁnancial aﬀairs and president, respectively, Garinkol and Lesure have advocated for shared governance in the decision-making process at Occidental.

In November 2015, less than three months into her ﬁrst semester at Oxy, Micol Garinkol ’19 joined hundreds of her fellow students in occupying the Arthur G. Coons Administrative Center—a ﬁve-day demonstration that sought a variety of curricular, budgetary, and operational changes, including more student say in the aﬀairs of the College. “When I ﬁrst got to campus, there was an ethos of mistrust among the students toward the administration, and vice versa,” says Garinkol, a politics major from Boston. “The administration was far less engaged or interested in even hearing us out, or running a student-centered ship.” Today, Garinkol says, there’s a decidedly diﬀerent climate on campus: “Now more than ever, I think the administration has a better ear toward students.” As vice president of ﬁnancial aﬀairs for Associated Students of Occidental College, Garinkol has helped lead student government to reassert its voice on campus, working 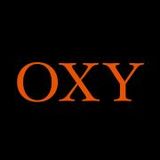