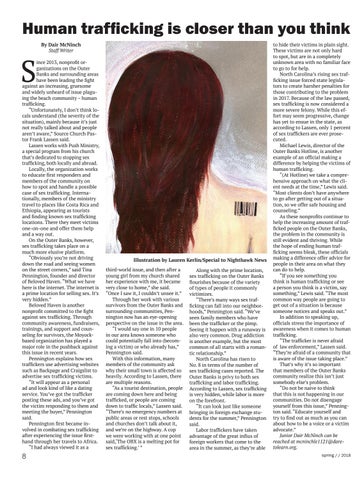 Human trafficking is closer than you think

ince 2013, nonprofit organizations on the Outer Banks and surrounding areas have been leading the fight against an increasing, gruesome and widely unheard of issue plaguing the beach community – human trafficking. “Unfortunately, I don’t think locals understand (the severity of the situation), mainly because it’s just not really talked about and people aren’t aware,” Source Church Pastor Frank Lassen said. Lassen works with Push Ministry, a special program from his church that’s dedicated to stopping sex trafficking, both locally and abroad. Locally, the organization works to educate first responders and members of the community on how to spot and handle a possible case of sex trafficking. Internationally, members of the ministry travel to places like Costa Rica and Ethiopia, appearing as tourists and finding known sex trafficking locations. There they meet victims one-on-one and offer them help and a way out. On the Outer Banks, however, sex trafficking takes place on a much more elusive platform. “Obviously you’re not driving down the road and seeing women on the street corners,” said Tina Pennington, founder and director of Beloved Haven. “What we have here is the internet. The internet is a prime location for selling sex. It’s very hidden.” Beloved Haven is another nonprofit committed to the fight against sex trafficking. Through community awareness, fundraisers, trainings, and support and counseling for survivors, the Moyockbased organization has played a major role in the pushback against this issue in recent years. Pennington explains how sex traffickers use advertising websites such as Backpage and Craigslist to advertise sex trafficking victims. “It will appear as a personal ad and look kind of like a dating service. You’ve got the trafficker posting these ads, and you’ve got the victim responding to them and meeting the buyer,” Pennington said. Pennington first became involved in combating sex trafficking after experiencing the issue firsthand through her travels to Africa. “I had always viewed it as a

Illustration by Lauren Kerlin/Special to Nighthawk News third-world issue, and then after a young girl from my church shared her experience with me, it became very close to home,” she said. “Once I saw it, I couldn’t unsee it.” Through her work with various survivors from the Outer Banks and surrounding communities, Pennington now has an eye-opening perspective on the issue in the area. “I would say one in 10 people in our area knows someone who could potentially fall into (becoming a victim) or who already has,” Pennington said. With this information, many members of the community ask why their small town is affected so heavily. According to Lassen, there are multiple reasons. “As a tourist destination, people are coming down here and being trafficked, or people are coming down to traffic locals,” Lassen said. “There’s no emergency numbers at public areas or rest stops, schools and churches don’t talk about it, and we’re on the highway. A cop we were working with at one point said,‘The OBX is a melting pot for sex trafficking.’ ”

Along with the prime location, sex trafficking on the Outer Banks flourishes because of the variety of types of people it commonly victimizes. “There’s many ways sex trafficking can fall into our neighborhoods,” Pennington said. “We’ve seen family members who have been the trafficker or the pimp. Seeing it happen with a runaway is also very common. Drug addiction is another example, but the most common of all starts with a romantic relationship.” North Carolina has risen to No. 8 in terms of the number of sex trafficking cases reported. The Outer Banks is privy to both sex trafficking and labor trafficking. According to Lassen, sex trafficking is very hidden, while labor is more on the forefront. “It can look just like someone bringing in foreign exchange students for the summer,” Pennington said. Labor traffickers have taken advantage of the great influx of foreign workers that come to the area in the summer, as they’re able

to hide their victims in plain sight. These victims are not only hard to spot, but are in a completely unknown area with no familiar face to go to for help. North Carolina’s rising sex trafficking issue forced state legislators to create harsher penalties for those contributing to the problem in 2017. Because of the law passed, sex trafficking is now considered a more severe felony. While this effort may seem progressive, change has yet to ensue in the state, as according to Lassen, only 1 percent of sex traffickers are ever prosecuted. Michael Lewis, director of the Outer Banks Hotline, is another example of an official making a difference by helping the victims of human trafficking. “(At Hotline) we take a comprehensive approach on what the client needs at the time,” Lewis said. “Most clients don’t have anywhere to go after getting out of a situation, so we offer safe housing and counseling.” As these nonprofits continue to help the increasing amount of trafficked people on the Outer Banks, the problem in the community is still evident and thriving. While the hope of ending human trafficking seems bleak, these officials making a difference offer advice for people in their area on what they can do to help. “If you see something you think is human trafficking or see a person you think is a victim, say something,” Lewis said. “The most common way people are going to get out of a situation is because someone notices and speaks out.” In addition to speaking up, officials stress the importance of awareness when it comes to human trafficking. “The trafficker is never afraid of law enforcement,” Lassen said. “They’re afraid of a community that is aware of the issue taking place.” That’s why it’s so important that members of the Outer Banks community realize this isn’t just somebody else’s problem. “Do not be naive to think that this is not happening in our communities. Do not disengage yourself from this issue,” Pennington said. “Educate yourself and try to find out as much as you can about how to be a voice or a victim advocate.” Junior Dair McNinch can be reached at mcninchle1121@daretolearn.org. spring / / 2018 Nighthawk News Magazine is the student-run publication of First Flight High School on the Outer Banks of North Carolina. The quarterly news...

Nighthawk News Magazine is the student-run publication of First Flight High School on the Outer Banks of North Carolina. The quarterly news...