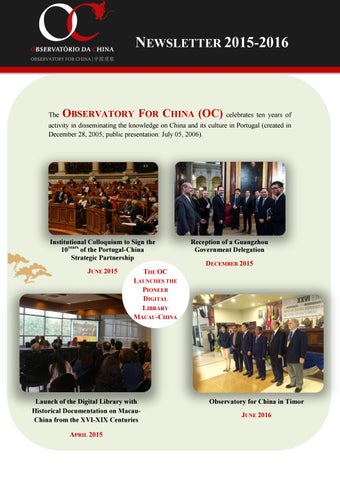 activity in disseminating the knowledge on China and its culture in Portugal (created in December 28, 2005; public presentation: July 05, 2006).

Observatory for China in Timor JUNE 2016

At the International Symposium the participants debated “What China?” and “Will Chineseness be too big for China?” All around the Chinese identity and the cultural, historical and artistic elements influence in the art international recognition of China.

The Digital Library Macau-China, fontesmacau.observatoriodachina.org, was created by the project “Descriptions on Macau-China from 16th to 19th centuries”, with the objective to free access (and scientifically) to these historical documentation, to all the international internet users. These Portuguese descriptions impressed are fundamental for the understanding of Macau/ China history and its paper in the world, as a pioneer in the Occident-China trade. The lectures were made by Prof. Inês Cordeiro, BNP Director; Vítor Ramalho, Secretary-general from UCCLA; Prof. Helena Patrício,

Director of Especial Collections; Rui Lourido, UCCLAâ&#x20AC;&#x2122;s Cultural Director and OCâ&#x20AC;&#x2122;s President. The initiative was welcomed by the public interest, once they showed to be receptive and enthusiastic about the implementation of this project.

Over the last ten years we have developed a wide and diverse range of activities in Portugal, China, Brazil and Cape Verde, in the institutional, cultural and scientific field, in order to stimulate the exchange of experiences, reflection and dissemination of knowledge between Portugal and China. Such as the edition of studies and sources such as the Digital Library Macau-China, conferences, exhibitions and institutional meetings; covering areas such different as, for example: dance, theater, cinema, painting and photography; among them, the itinerary of the Beijing opera in five cities, which had a great success. We understand the value of the Lusophony as an asset in the Chinese (Macau) relations with the Lusophone world, which are reflected in the actual strengthening of Lusophone-Chinese relations at various levels (socio-cultural, political and economic).

The speeches highlighted the importance of promoting diplomatic, economic and cultural relations between Portugal and People’s Republic of China. The more than 500 years of peaceful relationship with China are a surplus value to the deepening of the relations with China. Among the speakers were some of the actors of the relations between these two states, namely: Rui Machete (State and Foreign Affairs Minister), Jorge Barreto Xavier (Secretary of State for Culture), Huang Songfu (Ambassador of the People’s Republic of China in Portugal) Artur Lami (Economic Activities Director-general), Lingjiang Xu (Fosun representative) and other Chinese and Portuguese personalities.

By the invitation of the Dean of Renmi University of China and Chongyang Institute for Financial Studies, the OC President, Rui Lourido, was one of the speakers on the panel: “Establish a New International Trade Order in Globalization Era”. Also our associate,

Paulo Duarte, was one of the event speakers at the event at: “Latin America and South Atlantic within China’s New Silk Road”. It was with great concern that the OC followed the arguments of the various Chinese and foreign experts on the new Chinese proposals to involve, the Asian and Western countries, in sharing the benefits and costs of opening a free trade network between Asia and Europe. The participation of the OC, in this international forum, shows a greater maturity of our association, which adds up to ten years of existence and has been enjoying greater international and national recognition.

Presents: the BNP President, InÃªs Cordeiro; Secretary-general of UCCLA, Vitor Ramalho; Macau Foundation, sponsor of this Digital Library, was represented by its President, Wu Zhiliang, and its Secretary-general Cao Jinfeng; and the Head of Studies Institute, Lisa Wong. The Observatory for China was represented by its President, Rui Lourido, his Vice-president, Carla Fernandes, and the Chairman of the Audit Committee, Carlos Lipari.

By the invitation of OC, herewith UCCLA, received the delegation in order to intensify cultural exchanges and economic trade cooperation between the province and the Portuguese-speaking countries. Due to the historical elements shared between both countries, itâ&#x20AC;&#x2122;s crucial to strength up bilateral relations. The delegation was headed by the Director-general of the International Affairs Department of the Jiangsu Province Government.

Headed by Su Zhijia, President of the Political Consultative Conference of Guangdong Chinese People (regarded as the High Parliamentary Chamber of Guangzhou). The Observatory for China collaborated in organizing the delegation's program in Portugal, including the meeting with the Mayor of Lisbon, Doctor Fernando Medina, and another meeting with UCCLA.

As requested by Dom Duarte of Bragança, the OC decided to give our institutional support to his visit to China, in the quality of President of the Dom Manuel II Foundation.

For the Chinese New Year, held in February 2016 in Lisbon, the OC, with the Arroios Parish Council and the Chinese Embassy in Portugal, organized a film cycle (coordinated by Luís Campos Brás) and two photographic exhibitions (on the daily life in China, "Red China" at the market; and another exhibition on “Today’s women's role in China”, in the Forno do Tijolo old market).

UCCLA and OC participated in the Literary Festival of Macau. Rui Lourido gave an opening lecture on the “Role of the Memory for the Identity of a City or a Country”, where he also presented the Digital Library Macau-China, which was received with great appreciation by the public. Pacheco Pereira was one of the invited writers at the Macau Script Road.

OBSERVATORY FOR CHINA VISITâ&#x20AC;&#x2122;S CANTON AUDIENCE WITH THE DIRECTOR- GENERAL OF FOREIGN AFFAIRS DEPARTMENT AT THE GUANGZHOU GOVERNMENT Local: Guangzhou, headquarters of the Department of Foreign Affairs of the Canton Government Date: March 10, 2016

The sculptor Xu declared his interest in making an exhibition in Portugal with the support of the Guangzhou Government, being OC proposed has one of the organizers of this future exposition.

Audience with the Social Sciences Academy (SCA) of Guangdong and the Guangzhou SCA, at the headquarters of the provincial academy, where the entities agreed to strengthen relations between these academies and the OC through collaborating on academic projects, including the edition of the Chronicle of the Seas - Hailu and also the research project on the history of Guangzhou.

By request of the Ambassador of China in Lisbon, the OC received in audience the Ambassador Lv Fengding. The meeting began with a brief presentation of the various activities undertaken by the OC, followed by an exchange of ideas from the initiative "One Belt One Road". This meeting was held during the visit to Portugal of Lv Ambassador Fengding for the conference "The Initiative One Belt One Road and its influence", organized by the Embassy of China and the Diplomatic Institute of the Foreign Affairs Ministry of Portugal, held in the EDP headquarters in Lisbon.

The meeting allowed the strengthening of the relationship between the Ambassadors and the Observatory for China, based on mutual interest for the understanding of the historical and cultural heritage between the two countries, as well as the appreciation of cultural and economic exchange within a broader universe. In order to maximize synergies between China and the Lusophone cities, the OC invited the Secretarygeneral of UCCLA, VĂ­tor Ramalho, who highlighted the importance and potential of bilateral and multilateral Portugal-China Relationship for the 45 city members of UCCLA and the Portuguesespeaking countries.

There was a meeting between the BNP and the National Library of China (BNC) for promoting mutual cooperation. Through a protocol between both libraries that was sign by InĂŞs Cordeiro, Director of BNP, and the BNC by its Deputy Director, Zhang Zhiqing. The Observatory for China was invited for the meeting as well as three department directors of BNC. The Observatory for China is proud to contribute to the establishment of relationships between BNC and BNP. After the presentation of the Digital Library with Historical Documentation on Macau-China from the 16th to 19th centuries, the BNC asked to take part in this project as well as in others projects promoting the knowledge of its related literary patrimony and historical bounds.

The 26 Meeting of the Portuguese Speaking Universities Association was dedicated to the theme – Signs Routes: academic mobility and globalization within the CPLP and Macau. Rui Lourido, at the double quality, in one hand as President of OC and in another hand, as UCCLA Cultural Coordinator, presented the communication – Literatures and Memories in the Future of Macau and Timor – through the Digital Library about Macau and Timor.

In the meeting, 2nd theme: Science: diffusion and development(s) of the Portuguese language – Lourido presented also the UCCLA Literary Prize: New Talents New Books in Portuguese, which became the largest literary contest at all the Portuguese-speaking world, by the level of applications received (865 works of 722 authors sent by Portuguese-speaking countries and also from Canada, Italy and Spain, over 90 000 pages in the total). The Observatory for China was received by António da Conceição, State Minister, Coordinator of Social Affairs and Education Minister of Timor. They agreed to establish a protocol for mutual cooperation and giving access to the Digital Library with sources on Macau and Timor. By request of the Rector, Francisco Miguel Martins, another protocol will be celebrated with the National University of Timor Lorosae (UNTL), for the free access to the Digital Library.

The Historical Memory is a crucial factor for the multifaceted identity of nations. The multicultural society of Macau and Timor was built up over the centuries and played an important role in the relationship between Western and Eastern countries. The Macau city has played a pioneering role in the transference and inter-influence of technical and scientific knowledge (botanic, medicine, geography and cartography), socio-political and cultural relationship between the Eastern world and Europe, in particular with China. The strengthening of an historical memory, identity and social cohesion are elements that result from the knowledge that this project intends to contribute.

Meeting with the National University of Timor Rectors.

Note on the Digital Library with historical documentation on Macau and Timor The Digital Library is constituted by the integral text of the Portuguese books (including the cover and the back cover). Basically covers the history and geographical space around the former Portuguese Colonized Space. It is not only a literature library but also a researching tool for all kind of students, especially for Portuguese language speakers around the world. Allowing in a direct, fast, international way to have access to historical sources, mostly so far only available in restrict Portuguese archives. It allows each user to download the specific works they want to their personal computer or research center. This Digital Library represent by itself the automatically preservation, for the future generations, from the natural time degradation.

Exhibition on “New Silk, New Road” taking place in Évora, composed by high historical and patrimonial pieces of the Guangzhou Museum; Continue the project of the Digital Library with Historical Documentation on Macau-China from the 16th to the 19th Centuries, extended to the Library of Ajuda and Historical Archieve of Évora; FICCH – “Festival Internacional de Cinema Chinês e Lusófono”; Conference on “New Silk Road”; Develop a project with the Canton’s Social Sciences Academy;

The Observatory for China makes this ultimate tribute to the teachers Ana Maria Amaro and Ângela Guimarães, recognizing their academic and cultural value and contribution to the studies and relations between Portugal and China.

Ex-Member of the Scientific Committee