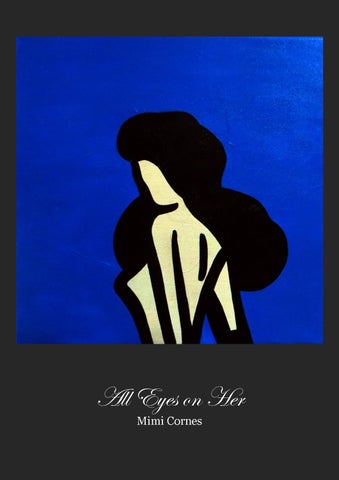 All Eyes on Her Mimi Cornes

All Eyes on Her is an exhibition of all new works by British artist Mimi Cornes, showing for the first time in an Oaktree & Tiger space. The artist’s latest series embraces the mystique, beauty and spirituality of the feminine form. Focusing on highly emotional art historical precedents such as the abstract art of Franz Marc, the Bathers of Paul Cézanne and the swirling and spirited art deco designs from the early twentieth century, Cornes weaves intricate creations of femininity that seem to fight against the flow of time. Simultaneously, there is an element of autobiography. Growing up barely seeing her father, an RAF pilot, Cornes recalls her profound admiration for her mother, “She had to be capable of everything. She had no one else to fall back on”. This respect and captivation provided an impetus to explore the various intricacies of femininity beyond merely the scopic gaze of the male artist progenitors of the classical nude. Cornes’ inspiration and artistic portrayal intermesh throughout her suite of canvases. Her paintings play with and disrupt temporal progression while presenting anecdotes, referents and allusions, combining and recombining styles and motifs from past and present. MeMyselfandI for example, mirrors and reinvigorates Cézanne’s revolutionary nude standard, Les Grandes Baigneuses, by empowering and re-examining notions of feminine form, confidence, and simplicity.

A sensual momentum is felt throughout works such as Back to Mine and Can I Have Your Number? where the thick curvatures of the figures move and interact with the viewer, communicating new emotions through a complex and highly stylized dynamic. The many shades of female nature are illustrated literally as the body language of the models presented indulges the viewer in endless layers of mystical intricacies. Marc's presence is felt through the simplicity of the figural elements and subjects which invites the viewer into a colourful new world. The characters draw in their audience as if to summon them into their state of flux and weightlessness. Other panels, such as Self Discovery touch on the feminine psyche by reflecting various emotional and physical states. Such constructions are in essence therapeutic, enabling a transient personal release for the artist through creativity and reflection. Through these works, Mimi Cornes welcomes her audience into her thought provoking ideas concerning the female form. In doing so, she investigates events, artistic touchstones, spirituality and abstraction and how they are and can be communicated in relation to femininity; with All Eyes on Her.

Rather like a dream in itself, the characters have no certain presence, they move around within the design, as if floating. Where are they? Who are they? What is their role? There is an emotional stillness, an uncertainty. They are markedly feminine but anonymous. What is their purpose? An integration between the background and characters pulsates with an undulating and immersing design drawing viewers both closer to, and further away from, the female forms. Thus the narrative is left open ended: dream-state or reflected states of consciousness?

The commanding and seductive nature of the female form has always been spellbinding. The Pre-Raphaelites once depicted such female power and sensuality in a distinctive and alluring way. John William Waterhouse’s The Lady of Shalott inspired this painting, Femme Fatales. Waterhouse’s portrait drew up the Lady of Shalott from Tennysons eponymous poem where a fairy is forbidden to look directly at reality. Here, Cornes’ eyeless nymphs mysteriously reject our gazes while confronting us with their featureless visages. We’re reminded of Shalott’s mystery, seen only by the reapers in space-less fields… And by the moon the reaper weary, Piling sheaves in uplands airy, Listening, whispers “ ’Tis the fairy Lady of Shalott.” Alfred Tennyson, The Lady of Shalott Part I, 1832

â&#x20AC;&#x153;There is a vulnerability for an individual woman when all eyes are on her. A juxtaposition of her lack of confidence and her desire to be noticedâ&#x20AC;?

About the Exhibition Space Many of Mimi Cornesâ&#x20AC;&#x2122; paintings involve cosy scenes of revelry that are laced with underlying narratives of seduction, intrigue and curiosity. In mirroring the anecdotal spaces depicted on her panels, the Oaktree & Tiger gallery space offers an unconventional approach to display. More than a white cube, visitors are invited into a private domain where the interaction with the art is as vivacious as the discussion that surrounds it.

Oaktree & Tiger Gallery Situated in the prestigious district of South Kensington, the Oaktree & Tiger HQ offers an intimate space for art appreciation. A home that has been upgraded to continuously display art, the private space will host a series of special viewings throughout 2013 featuring the best emerging talent from London and abroad. Our objectives are to foster conversation around topquality artists while catering to the needs of collectors. All Eyes on Her Catalogue

Oaktree & Tiger catalogue for the new exhibition by Mimi Cornes, "All Eyes on Her".

All Eyes on Her Catalogue

Oaktree & Tiger catalogue for the new exhibition by Mimi Cornes, "All Eyes on Her".