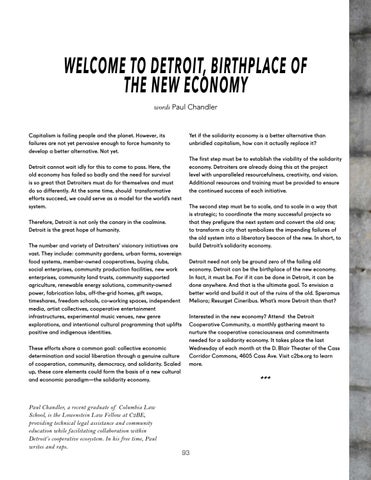 Capitalism is failing people and the planet. However, its failures are not yet pervasive enough to force humanity to develop a better alternative. Not yet. Detroit cannot wait idly for this to come to pass. Here, the old economy has failed so badly and the need for survival is so great that Detroiters must do for themselves and must do so differently. At the same time, should transformative efforts succeed, we could serve as a model for the world’s next system. Therefore, Detroit is not only the canary in the coalmine. Detroit is the great hope of humanity. The number and variety of Detroiters’ visionary initiatives are vast. They include: community gardens, urban farms, sovereign food systems, member-owned cooperatives, buying clubs, social enterprises, community production facilities, new work enterprises, community land trusts, community supported agriculture, renewable energy solutions, community-owned power, fabrication labs, off-the-grid homes, gift swaps, timeshares, freedom schools, co-working spaces, independent media, artist collectives, cooperative entertainment infrastructures, experimental music venues, new genre explorations, and intentional cultural programming that uplifts positive and indigenous identities. These efforts share a common goal: collective economic determination and social liberation through a genuine culture of cooperation, community, democracy, and solidarity. Scaled up, these core elements could form the basis of a new cultural and economic paradigm—the solidarity economy.

Yet if the solidarity economy is a better alternative than unbridled capitalism, how can it actually replace it? The first step must be to establish the viability of the solidarity economy. Detroiters are already doing this at the project level with unparalleled resourcefulness, creativity, and vision. Additional resources and training must be provided to ensure the continued success of each initiative. The second step must be to scale, and to scale in a way that is strategic; to coordinate the many successful projects so that they prefigure the next system and convert the old one; to transform a city that symbolizes the impending failures of the old system into a liberatory beacon of the new. In short, to build Detroit’s solidarity economy. Detroit need not only be ground zero of the failing old economy. Detroit can be the birthplace of the new economy. In fact, it must be. For if it can be done in Detroit, it can be done anywhere. And that is the ultimate goal. To envision a better world and build it out of the ruins of the old. Speramus Meliora; Resurget Cineribus. What’s more Detroit than that? Interested in the new economy? Attend the Detroit Cooperative Community, a monthly gathering meant to nurture the cooperative consciousness and commitments needed for a solidarity economy. It takes place the last Wednesday of each month at the D. Blair Theater of the Cass Corridor Commons, 4605 Cass Ave. Visit c2be.org to learn more. 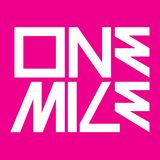