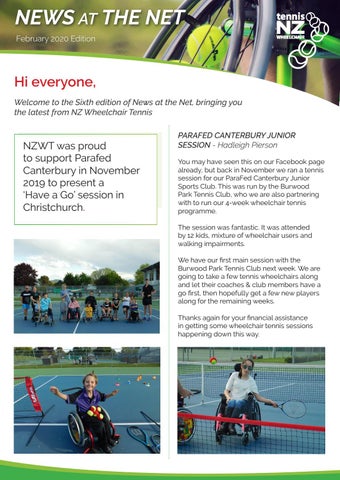 NEWS AT THE NET February 2020 Edition

Hi everyone, Welcome to the Sixth edition of News at the Net, bringing you the latest from NZ Wheelchair Tennis

PARAFED CANTERBURY JUNIOR SESSION - Hadleigh Pierson You may have seen this on our Facebook page already, but back in November we ran a tennis session for our ParaFed Canterbury Junior Sports Club. This was run by the Burwood Park Tennis Club, who we are also partnering with to run our 4-week wheelchair tennis programme. The session was fantastic. It was attended by 12 kids, mixture of wheelchair users and walking impairments. We have our first main session with the Burwood Park Tennis Club next week. We are going to take a few tennis wheelchairs along and let their coaches & club members have a go first, then hopefully get a few new players along for the remaining weeks. Thanks again for your financial assistance in getting some wheelchair tennis sessions happening down this way.

Coming out of Retirement Chris Harvey Well I went to Christchurch last weekend to make up numbers for the Quad Draw. After playing my first match I wondered why the hell it took me so long to make my comeback and get back on court!!! What a great weekend catching up with old friends and rivals, the friendly banter and camaraderie that happens all around the centre, on and off court – I had really missed it. It’s always good in our sport to see the old familiar faces slogging it out on the court in 30-degree temperatures (thanks Christchurch), and it’s just as great to see the new up and coming talent eager to get on court. As Mainland says, good things take time.

Big Ups to Permobil NZ and the sunblock guy – you saved me from turning into crispy bacon, Brian Perry Charitable Trust, Lion Foundation, and Grassroots Trust and of course the NZWT committee. Without your support I would still be in retirement .

Tournament Directors ‘Take Away’ Leslie Wilkinson I have just read Chris Harvey’s Quad report and like Chris, I enjoyed my return to our NZ Open but as a tournament Director. These players are the best of all the categories to work with. We had 11 Main Draw entries and it was disappointing to all of us involved to have so few. Great to be able to run a quad draw though and thank you to Chris and Riki Foulsham who did indeed enter to make up numbers but ended up enjoying themselves. Watching these guys play pulls at heart strings as the effort is incredible. Good to see the juniors stop and watch, while they were at the same venue playing a Junior ITF. Vanessa (our fantastic photographer) heard one junior ask if a player chose to play in a chair or had to!!!! Whew!

Awesome to have Leslie back as our trusty tournament director this year and to welcome Payal our new tournament referee. You know you have a good team when all the officials become ball kids for the quads in the heat of the day. Thanks to the van drivers Diana and Olivia for getting everyone to and from the airport and venue on time. Also James - thanks for giving me my noisy car back bro (Jack loved it). The lunches were fantastic and the girls behind the counter weren’t half bad either.

Our sponsors PERMOBIL turned up with new samples of innovative chair, bikes and a stand-up frame. They also had a representative who took part in the prize-giving. They strongly indicated to me they would love to be involved again next year – wonderful news. A great speech was given by Glenn Barnes as the Christchurch representative and I was pleased to hear him implore all those present to endorse the tournament to other players and encourage them to enter. How great it would be to have men’s, women’s and quad draws in 2021. Thanks also to those players who gave our only junior, Gabby, a hit daily during the tournament. Generous spirits reside in this community. Continued overleaf.

Payal Jain was referee for her first Wheelchair tournament and her first NZ Tournament. She lived in NZ a few years ago but went back to India while her daughter was small to be near family. She now is settling back in NZ and will work as a white badge referee. She worked on the circuit full-time in India so has plenty of experience and will be an asset to tennis tournaments in NZ. Thanks to Jack also for helping me around the courts. Great job. What fun we had with the IPINs before the tournament started. However, we made the deadline in the end and despite Curtis Smith playing under the name Curtis Crighton to move things along we managed to have all those entered in the draw participate in the tournament. Thanks to Canterbury Tennis for making us welcome at Wilding Park and providing any support they could. There was a suggestion to look at Nga Puna Wai as a venue for next year. The courts are in good condition and facilities suit Wheelchairs. There will be a post-tournament discussion before committing to next year. Thanks all those involved in the organisation who contributed so much!

TICHEMJA ACTIV8 2019 - Nikki Howlett The tournament season started once again with the Waikato Activ8 tournament at the Perry arena in Hamilton back in November which was held alongside the AGM. A development clinic then followed the conclusion of the tournament finals where players were on hand to give tips to the new and up and coming players that attended the clinic. Once again partners are invaluable to these sessions including Halberg the ITF and the Tichemja Trust.

ANNUAL AWARDS Great to see Tiffiney Perry awarded NZ Wheelchair Player of the year at the Tennis NZ Awards for her services and commitment to NZWT for the last 20 years!. Well deserved indeed.

Thank you to our Sponsors & Supporters Check out the latest New at the Net, featuring reports from events around the country, development opportunities and more.

Check out the latest New at the Net, featuring reports from events around the country, development opportunities and more.