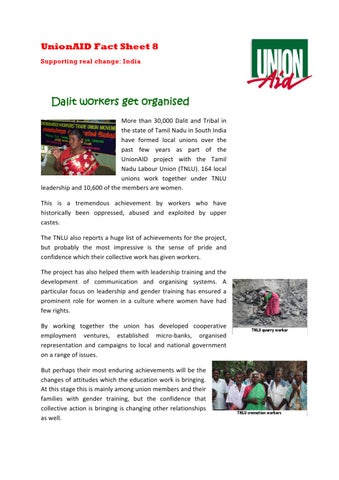 Dalit workers get organised More than  30,000  Dalit  and  Tribal  in  the state of Tamil Nadu in South India  have  formed  local  unions  over  the  past  few  years  as  part  of  the  UnionAID  project  with  the  Tamil  Nadu Labour Union (TNLU). 164  local  unions  work  together  under  TNLU  leadership and 10,600 of the members are women.  This  is  a  tremendous  achievement  by  workers  who  have  historically  been  oppressed,  abused  and  exploited  by  upper  castes.   The TNLU also reports a huge list of achievements for the project,  but  probably  the  most  impressive  is  the  sense  of  pride  and  confidence which their collective work has given workers.   The project has also helped them with leadership training and the  development  of  communication  and  organising  systems.  A  particular  focus  on  leadership  and  gender  training  has  ensured  a  prominent  role  for  women  in  a  culture  where  women  have  had  few rights.  By  working  together  the  union  has  developed  cooperative  employment  ventures,  established  micro‐banks,  organised  representation  and  campaigns  to  local  and  national  government  on a range of issues.   But perhaps their most enduring achievements will be the  changes of attitudes which the education work is bringing.  At this stage this is mainly among union members and their  families  with  gender  training,  but  the  confidence  that  collective action is bringing is changing other relationships  as well.

This is a tremendous achievement by workers who have historically been oppressed, abused and exploited by upper castes. By working together...

This is a tremendous achievement by workers who have historically been oppressed, abused and exploited by upper castes. By working together...