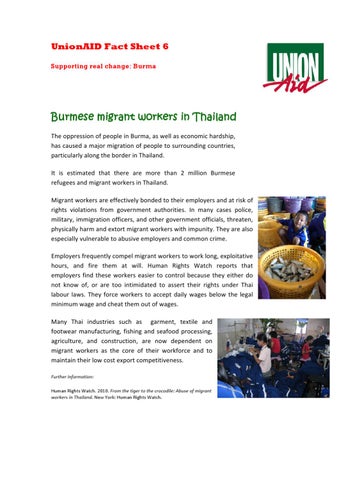 Burmese migrant workers in Thailand The oppression of people in Burma, as well as economic hardship,  has caused a major migration of people to surrounding countries,  particularly along the border in Thailand.   It  is  estimated  that  there  are  more  than  2  million  Burmese  refugees and migrant workers in Thailand.   Migrant workers are effectively bonded to their employers and at risk of  rights  violations  from  government  authorities.  In  many  cases  police,  military, immigration officers, and other government officials, threaten,  physically harm and extort migrant workers with impunity. They are also  especially vulnerable to abusive employers and common crime.  Employers frequently compel migrant workers to work long, exploitative  hours,  and  fire  them  at  will.  Human  Rights  Watch  reports  that  employers  find  these  workers  easier  to  control  because  they  either  do  not  know  of,  or  are  too  intimidated  to  assert  their  rights  under  Thai  labour  laws.  They  force  workers  to  accept  daily  wages  below  the  legal  minimum wage and cheat them out of wages.   Many  Thai  industries  such  as    garment,  textile  and  footwear manufacturing, fishing and seafood processing,  agriculture,  and  construction,  are  now  dependent  on  migrant  workers  as  the  core  of  their  workforce  and  to  maintain their low cost export competitiveness.   Further information:   Human Rights Watch. 2010. From the tiger to the crocodile: Abuse of migrant  workers in Thailand. New York: Human Rights Watch.