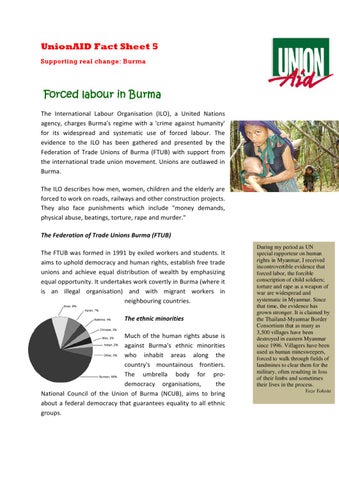 Forced labour in Burma The International  Labour  Organisation  (ILO),  a  United  Nations  agency,  charges  Burma's  regime  with  a  'crime  against  humanity'  for  its  widespread  and  systematic  use  of  forced  labour.  The  evidence  to  the  ILO  has  been  gathered  and  presented  by  the  Federation  of  Trade  Unions  of  Burma  (FTUB)  with  support  from  the international trade union movement. Unions are outlawed in  Burma.  The ILO describes how men, women, children and the elderly are  forced to work on roads, railways and other construction projects.  They  also  face  punishments  which  include  "money  demands,  physical abuse, beatings, torture, rape and murder."  The Federation of Trade Unions Burma (FTUB)   The FTUB was formed in 1991 by exiled workers and students. It  aims to uphold democracy and human rights, establish free trade  unions  and  achieve  equal  distribution  of  wealth  by  emphasizing  equal opportunity. It undertakes work covertly in Burma (where it  is  an  illegal  organisation)  and  with  migrant  workers  in  neighbouring countries.  The ethnic minorities  Much  of  the  human  rights  abuse  is  against  Burma's  ethnic  minorities  who  inhabit  areas  along  the  country's  mountainous  frontiers.  The  umbrella  body  for  pro‐ democracy  organisations,    the  National  Council  of  the  Union  of  Burma  (NCUB),  aims  to  bring  about a federal democracy that guarantees equality to all ethnic  groups.

During my period as UN special rapporteur on human rights in Myanmar, I received incontrovertible evidence that forced labor, the forcible conscription of child soldiers; torture and rape as a weapon of war are widespread and systematic in Myanmar. Since that time, the evidence has grown stronger. It is claimed by the Thailand-Myanmar Border Consortium that as many as 3,500 villages have been destroyed in eastern Myanmar since 1996. Villagers have been used as human minesweepers, forced to walk through fields of landmines to clear them for the military, often resulting in loss of their limbs and sometimes their lives in the process. Yozo Yokota

The International Labour Organisation (ILO), a United Nations agency, charges Burma's regime with a 'crime against humanity' for its widespr...

The International Labour Organisation (ILO), a United Nations agency, charges Burma's regime with a 'crime against humanity' for its widespr...