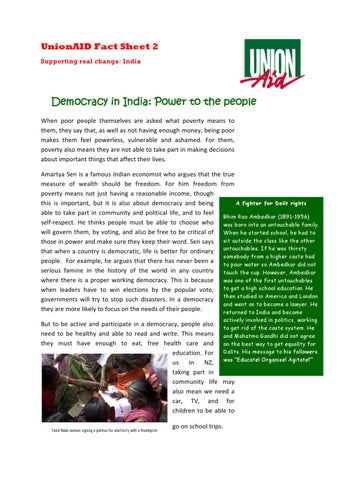 Democracy in India: Power to the people When poor  people  themselves  are  asked  what  poverty  means  to  them, they say that, as well as not having enough money, being poor  makes  them  feel  powerless,  vulnerable  and  ashamed.  For  them,  poverty also means they are not able to take part in making decisions  about important things that affect their lives.   Amartya Sen is a famous Indian economist who argues that the true  measure  of  wealth  should  be  freedom.  For  him  freedom  from  poverty  means  not  just  having  a  reasonable  income,  though  A fighter for Dalit rights this  is  important,  but  it  is  also  about  democracy  and  being  able  to  take  part  in  community  and  political  life,  and  to  feel  Bhim Rao Ambedkar (1891-1956) self‐respect.  He  thinks  people  must  be  able  to  choose  who  was born into an untouchable family. will govern them, by voting, and also be free to be critical of  When he started school, he had to those in power and make sure they keep their word. Sen says  sit outside the class like the other that when a country is democratic, life is better for ordinary  untouchables. If he was thirsty somebody from a higher caste had people.  For example, he argues that there has never been a  to pour water so Ambedkar did not serious  famine  in  the  history  of  the  world  in  any  country  touch the cup. However, Ambedkar where  there  is  a  proper  working  democracy.  This  is  because  was one of the first untouchables when  leaders  have  to  win  elections  by  the  popular  vote,  to get a high school education. He governments  will  try  to  stop  such  disasters.  In  a  democracy  then studied in America and London and went on to become a lawyer. He they are more likely to focus on the needs of their people.  returned to India and became actively involved in politics, working

But to be active and participate in a democracy, people also  to get rid of the caste system. He need  to  be  healthy  and  able  to  read  and  write.  This  means  and Mahatma Gandhi did not agree they  must  have  enough  to  eat,  free  health  care  and  on the best way to get equality for education.  For  Dalits. His message to his followers us  in  NZ,  was “Educate! Organise! Agitate!’” taking  part  in  community  life  may  also  mean  we  need  a  car,  TV,  and  for  children to be able to  Tamil Nadu women signing a petition for electricity with a thumbprint

When poor people themselves are asked what poverty means to them, they say that, as well as not having enough money, being poor makes them f...

When poor people themselves are asked what poverty means to them, they say that, as well as not having enough money, being poor makes them f...