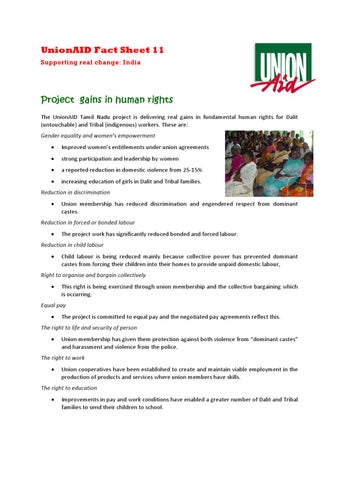 strong participation and leadership by women

a reported reduction in domestic violence from 25‐15%

increasing education of girls in Dalit and Tribal families.

Reduction in forced or bonded labour  •

The project work has significantly reduced bonded and forced labour.

Child labour  is  being  reduced  mainly  because  collective  power  has  prevented  dominant  castes from forcing their children into their homes to provide unpaid domestic labour,

Right to organise and bargain collectively  •

This right is being exercised through union membership and the collective bargaining which  is occurring.

The project is committed to equal pay and the negotiated pay agreements reflect this.

The right to life and security of person  •

Union membership has given them protection against both violence from “dominant castes”  and harassment and violence from the police.

The right to work  •

Union cooperatives have been established to create and maintain viable employment in the  production of products and services where union members have skills.

The right to education  •

Improvements in pay and work conditions have enabled a greater number of Dalit and Tribal  families to send their children to school.