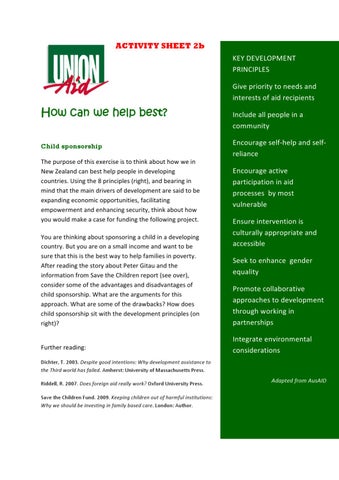 How can we help best?

Include all people in a  community

Encourage self‐help and self‐ reliance

The purpose of this exercise is to think about how we in  New Zealand can best help people in developing  countries. Using the 8 principles (right), and bearing in  mind that the main drivers of development are said to be  expanding economic opportunities, facilitating  empowerment and enhancing security, think about how  you would make a case for funding the following project.

Encourage active  participation in aid  processes  by most  vulnerable

You are thinking about sponsoring a child in a developing  country. But you are on a small income and want to be  sure that this is the best way to help families in poverty.  After reading the story about Peter Gitau and the  information from Save the Children report (see over),  consider some of the advantages and disadvantages of  child sponsorship. What are the arguments for this  approach. What are some of the drawbacks? How does  child sponsorship sit with the development principles (on  right)?

Further reading:  Dichter, T. 2003. Despite good intentions: Why development assistance to  the Third world has failed. Amherst: University of Massachusetts Press.  Riddell, R. 2007. Does foreign aid really work? Oxford University Press.  Save the Children Fund. 2009. Keeping children out of harmful institutions:  Why we should be investing in family based care. London: Author.

The Story of Peter Gitau Thirty years after Peter Gitau escaped life in the slums of Kenya, he successfully tracked down the New Zealanders who rescued him. In 1978, when he was four, Mr. Gitau was faced with a bleak existence after his parents divorced. His mother and her seven children were forced to leave their home. While five children were sent to stay with other family members, Peter and his two-year old brother remained with their mother in a city slum house which had mud and sticks for walls, and a piece of corrugated iron for a roof. His mother provided for them by selling food for farmers at the market. Then, in 1980, Mr. Gitau was taken in by Starehe Boys Centre and a church group in Khandallah sponsored his clothes, food and education through Save the Children. He left school in 1991, and attended a teaching training college earning teaching qualifications in English, English literature and Swahili. Mr. Gitau feels he owes the group a huge debt of gratitude. Without sponsorship he would probably be dead. All the children he had grown up with in the slum were now dead. “Other people have a place they can go and find childhood friends. I can’t. They’re all gone.” The Dominion Post 6th July 2009 (abridged)

the overwhelming majority of children in orphanages have one or both parents alive. Many parents place their children in care because they cannot afford to feed and educate them. For example in Aceh after the tsunami, it was found that 97.5% of ‘orphans’ were placed in childcare institutions by their own parents to ensure they received an education. In other countries, the rates vary but in the majority, 80-90% of institutionalised children have one or both parents alive. Save the Children argues that “the very existence of institutions encourages families to place their children into care, and

Encourage self‐help and self‐ reliance Include all people in a community Integrate environmental considerations Encourage active participati...

Encourage self‐help and self‐ reliance Include all people in a community Integrate environmental considerations Encourage active participati...