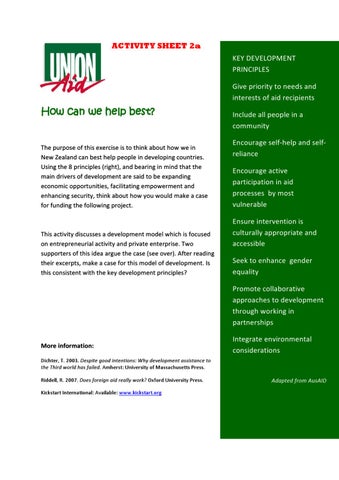 How can we help best?

The purpose of this exercise is to think about how we in  New Zealand can best help people in developing countries.   Using the 8 principles (right), and bearing in mind that the   main drivers of development are said to be expanding  economic opportunities, facilitating empowerment and  enhancing security, think about how you would make a case  for funding the following project.      This activity discusses a development model which is focused  on entrepreneurial activity and private enterprise. Two  supporters of this idea argue the case (see over). After reading  their excerpts, make a case for this model of development. Is  this consistent with the key development principles?

Kickstart International When he was an engineering graduate, Martin Fisher went to Kenya to work  for a large aid agency. He found out first hand that large chunks of aid did  not lift people out of poverty at all. He found that community projects, such  as a large rural water programme, often fell over a few years later because  no one felt responsible for the pumps. Projects that poured money into an  area to bring schools, water, and medical care created a dependency from  which it was difficult to exit.  This sparked an organisation called Kickstart International. However Mr.  Fisher has been criticised because of his belief that entrepreneurialism is the  best way to help the poor. “A poor person only needs one thing and that’s a  way to make money” he says. Mr. Fisher believes requiring an individual to  raise a small amount of capital is important for dignity’s sake and in fairness  to those who don’t receive aid and the private sector. A $60 hand pump can  give a farmer year‐round harvests:  The difficulty, however, is that the market is hard to convince. The pumps  are sold to the poorest, most risk‐averse hardest to reach customers in the  whole world. For this reason, most of the donations to Kickstart go into  marketing the products. It is still aid but it is necessary to overcome a market  failure. It’s the same way that right now solar energy in the developed world  makes no sense. It’s too expensive. Nonetheless we have a huge solar  industry. Why? Because we’ve got a smart government subsidy which is in  there subsidising every solar panel until the demand goes up and the price  goes down, we overcome that market failure and then it will become a huge  industry selling solar panels. (The Dominion Post, March 23, 2009. Abridged)  Does traditional charity really work? The Buy-One, Give-One (or BOGO) model has become increasingly popular for companies in the United States, particularly for places like Africa. Whether it's shoes, flashlights or computers, you can find many retail products that are produced by U.S. companies (often in Asia) where the purchase price paid by a U.S. consumer includes the cost of sending a second such product to Africa. Take shoes, for example. Africans need shoes. But now comes the real issue: Should shoes be donated by Western companies, or should they be produced in the country and sold? This is where the BOGO model, while well-intentioned, appears to me to be hurting a long-term, sustainable solution for Africa. First, as long as rural Africans have an opportunity to potentially receive free shoes donated by a U.S. shoe company, why would they want to pay for shoes? Second, as long as rural Africans are unwilling to pay for shoes, how can local African shoemakers hope to have a flourishing local business?

By Todd Johnson (abridged) from http://bit.ly/9nA8ag )