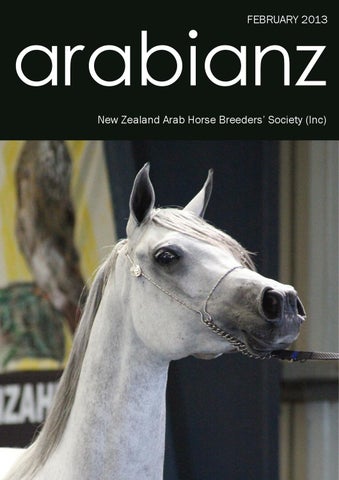 Peter Upton Greeting Card Set: $10.00 per set 2 of each design & envelopes, blank inside

Disclaimer: The opinions expressed in this publication are those of the contributors and not necessarily those held by the NZAHBS. While every care is taken, the Society accepts no responsibility for any loss or damage of material or photographs submitted for publication. For advertising enquiries, prices & specifications contact: Fiona McLachlan (see contact list for details) www.newzealandarabs.com

Copyright: All articles, pictures and information appearing in Arabianz are subject to copyright. Reproduction of any part of Arabianz is not allowed without prior permission of the NZAHBS.

(only available to advertisers)

(only available to advertisers)

Annual General Meeting The 2013 AGM will be held in Auckland on Saturday 18 May 2013. The Auckland Arabian Horse Club are organising a seminar for the Sunday with Allan Preston of Australia. Full details and a booking form will follow once arrangements have been confirmed. Any Special Resolutions to be considered by the AGM must be submitted to the National Secretary by 18 March 2013 (60 days prior to the AGM). Council nominations received have not exceeded the vacancies to be filled, therefore no postal ballot is required this year. The new Council will be announced at the AGM.

2013 membership invoices were posted with the December mailout and are due for payment now. Please contact the office if you did not receive your invoice. A reminder that any member wishing to resign their membership must do so in writing. Mare & Stallion Returns Mare & Stallion Returns for the current 2012/2013 season were posted with the December mailout and need to be returned to the Office by 1 April 2013. Website The Society’s new website is finally up and running. The content and layout have been simplified to make it easier to navigate. Check it out: www.newzealandarabs.com

Branding & Microchipping After further debate on this topic Council confirm that it is now compulsory to identify all Purebred foals born from 1 August 2012 by branding and/or microchipping. This means: •

If you have a copyright free, high resolution photo that you would like included in the Photo Gallery please email the photo and description to: arabnewzealand@xtra.co.nz

Horses born from 1 August 2012 - to be branded and/or microchipped.

Purebred Registrations Purebred Registrations for foals born during the 2012/2013 season are due on 1 July 2013. Please note the current registration Regulations are as per the green “Rules and Regulations 2007” booklet. Please note: Section B, 1 (i) (c): “Completed Identification and Naming Form signed by the Breeder and countersigned by a qualified Veterinary Surgeon...” There is no box for this on the current registration form. A stamp will be made and applied to future books issued. In the meantime - vets should sign the form above the horse diagrams on page 2. A late fee of $300.00 will be applicable to any breeder submitting late registrations for horses over the age of 2 years. Such applications will need to be approved by Council before being accepted and must adhere to whatever rules were in place at the time the foal was born, the breeder must have been a member at the time the foal was born, and a member at the time of application. 6

Members who would like a link added to our Stud Links page please email your website address details to: arabnewzealand@xtra.co.nz. Please also add the Society’s website address to your own page to improve our search engine rankings.

The next NZAHBS Council meeting will be held on Friday 17 May 2013 in Auckland. If you wish to have any matters raised at this meeting, please ensure that they are submitted to the Office at least 14 days out from the meeting.

FROM THE MAILBAG Cyprus Al Thaqib (Joda Aloof x Cyprus Alii Esperance), also known as ‘Chaos’, is a 5 year old purebred Arabian gelding bred by Penny Buckthought of Cyprus Arabians. Liana Mikaera took him on and started competing with him as a 2 year old where he won Champion in hand Arabian at Feilding A&P, Reserve Champion Arabian in hand at Manawatu A&P as a 4 year old then Champion Arabian in hand at Feilding A&P later that year. Liana broke in Chaos herself when he was a 4 year old and he started his ridden career in 2012. At his first ridden show he placed Reserve Champion, and then Champion at his second and third shows. Over winter he started Show Jumping and Dressage showing his natural talent for both, placing in Show Jumping classes up to 90cm and Dressage up to Level One. He then trialled to be part of the Manawatu Show Hunter Championships team, where he attained a Reserve spot which is quite an achievement being his first attempt at this discipline. Last month he competed in his first two One Day Events at Pre Training level – at the second he placed 2nd overall and was one of only two horses to achieve a clear Cross Country round. This month he competed in Show Hunter and Show Jumping, successfully placing in his Show Hunter classes and placing 4th in the 1.05m in one round out of 30 horses. Liana reports that he gets comments everywhere he goes on his style over a fence and his calm nature. Only under saddle for a year this boy is setting a fine example for the Arabian breed and at only 5 years old, the sky’s the limit!

ARABIANZ CONTENT REQUIRED for upcoming issues Members are invited to submit articles, photographs & items that may be of interest to the wider Arabian membership. Please email your submissions by the last Wednesday of every month to the National Secretary: arabnewzealand@xtra.co.nz

Horse of the Year Show

A Gift from the Desert: The Arabian Horse The new classic film about the Arabian horse. Every breeder, owner, and rider should have it! Filmed on location in Saudi Arabia, Oman, Great Britain, Kentucky, and California with the Saudi Equestrian riders, the Oman Royal Calvary, National Jumping Champions, National Dressage Champions, National Western Champions, and National Working Cowhorse Champions. A soaring panorama of the horse that began in Arabia and went on to create empires and champions today in every category. This film was written and directed by award-winning filmmaker Jo Franklin. Named â&#x20AC;&#x153;One of the Top 100 Film Producers in the U.S.â&#x20AC;? by Millimeter Magazine, Ms. Franklin is a rider and breeder of Arabian horses.

Order your DVD at: