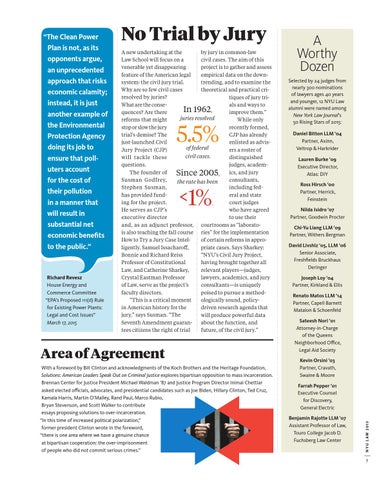 No Trial by Jury A new undertaking at the by jury in common-law Law School will focus on a civil cases. The aim of this venerable yet disappearing project is to gather and assess feature of the American legal empirical data on the downsystem: the civil jury trial. trending, and to examine the Why are so few civil cases theoretical and practical criresolved by juries? tiques of jury triWhat are the conseals and ways to , quences? Are there improve them.” juries resolved reforms that might While only stop or slow the jury recently formed, trial’s demise? The CJP has already just-launched Civil enlisted as advisof federal Jury Project (CJP) ers a roster of civil cases. will tackle these distinguished questions. judges, academThe founder of ics, and jury , Susman Godfrey, consultants, the rate has been Stephen Susman, including fedhas provided funderal and state ing for the project. court judges . He serves as CJP’s who have agreed executive director to use their and, as an adjunct professor, courtrooms as “laboratois also teaching the fall course ries” for the implementation How to Try a Jury Case Intelof certain reforms in approligently. Samuel Issacharoff, priate cases. Says Sharkey: Bonnie and Richard Reiss “NYU’s Civil Jury Project, Professor of Constitutional having brought together all Law, and Catherine Sharkey, relevant players—judges, Crystal Eastman Professor lawyers, academics, and jury of Law, serve as the project’s consultants—is uniquely faculty directors. poised to pursue a method“This is a critical moment ologically sound, policyin American history for the driven research agenda that jury,” says Susman. “The will produce powerful data Seventh Amendment guaranabout the function, and tees citizens the right of trial future, of the civil jury.”

Area of Agreement With a foreword by Bill Clinton and acknowledgments of the Koch Brothers and the Heritage Foundation, Solutions: American Leaders Speak Out on Criminal Justice explores bipartisan opposition to mass incarceration. Brennan Center for Justice President Michael Waldman ’87 and Justice Program Director Inimai Chettiar asked elected officials, advocates, and presidential candidates such as Joe Biden, Hillary Clinton, Ted Cruz, Kamala Harris, Martin O’Malley, Rand Paul, Marco Rubio, Bryan Stevenson, and Scott Walker to contribute essays proposing solutions to over-incarceration. “In this time of increased political polarization,” former president Clinton wrote in the foreword, “there is one area where we have a genuine chance at bipartisan cooperation: the over-imprisonment of people who did not commit serious crimes.”

“The Clean Power Plan is not, as its opponents argue, an unprecedented approach that risks economic calamity; instead, it is just another example of the Environmental Protection Agency doing its job to ensure that polluters account for the cost of their pollution in a manner that will result in substantial net economic benefits to the public.”