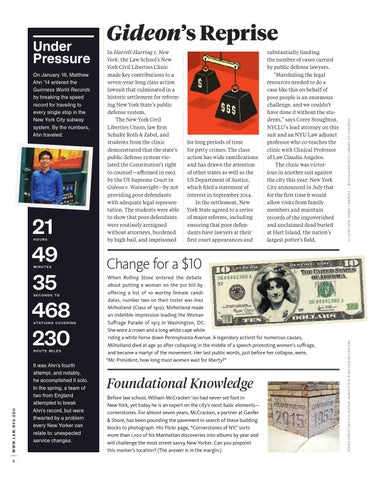 It was Ahn’s fourth attempt, and notably, he accomplished it solo. In the spring, a team of two from England attempted to break Ahn’s record, but were thwarted by a problem every New Yorker can relate to: unexpected service changes.

for long periods of time for petty crimes. The class action has wide ramifications and has drawn the attention of other states as well as the US Department of Justice, which filed a statement of interest in September 2014. In the settlement, New York State agreed to a series of major reforms, including ensuring that poor defendants have lawyers at their first court appearances and

substantially limiting the number of cases carried by public defense lawyers. “Marshaling the legal resources needed to do a case like this on behalf of poor people is an enormous challenge, and we couldn’t have done it without the students,” says Corey Stoughton, NYCLU’s lead attorney on this suit and an NYU Law adjunct professor who co-teaches the clinic with Clinical Professor of Law Claudia Angelos. The clinic was victorious in another suit against the city this year: New York City announced in July that for the first time it would allow visits from family members and maintain records of the impoverished and unclaimed dead buried at Hart Island, the nation’s largest potter’s field.

On January 16, Matthew Ahn ’14 entered the Guinness World Records by breaking the speed record for traveling to every single stop in the New York City subway system. By the numbers, Ahn traveled:

In Hurrell-Harring v. New York, the Law School’s New York Civil Liberties Clinic made key contributions to a seven-year-long class action lawsuit that culminated in a historic settlement for reforming New York State’s public defense system. The New York Civil Liberties Union, law firm Schulte Roth & Zabel, and students from the clinic demonstrated that the state’s public defense system violated the Constitution’s right to counsel—affirmed in 1963 by the US Supreme Court in Gideon v. Wainwright—by not providing poor defendants with adequate legal representation. The students were able to show that poor defendants were routinely arraigned without attorneys, burdened by high bail, and imprisoned

Change for a $10 When Rolling Stone entered the debate about putting a woman on the $10 bill by offering a list of 10 worthy female candidates, number two on their roster was Inez Milholland (Class of 1912). Milholland made an indelible impression leading the Woman Suffrage Parade of 1913 in Washington, DC. She wore a crown and a long white cape while riding a white horse down Pennsylvania Avenue. A legendary activist for numerous causes, Milholland died at age 30 after collapsing in the middle of a speech promoting women’s suffrage, and became a martyr of the movement. Her last public words, just before her collapse, were, “Mr. President, how long must women wait for liberty?”

Foundational Knowledge Before law school, William McCracken ’00 had never set foot in New York, yet today he is an expert on the city’s most basic elements— cornerstones. For almost seven years, McCracken, a partner at Ganfer & Shore, has been pounding the pavement in search of these building blocks to photograph. His Flickr page, “Cornerstones of NY,” sorts more than 1,100 of his Manhattan discoveries into albums by year and will challenge the most street-savvy New Yorker. Can you pinpoint this marker’s location? (The answer is in the margin.)