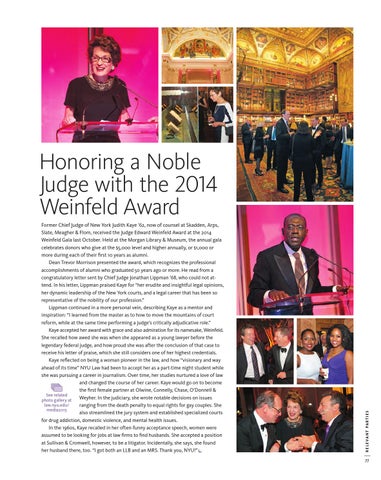 Former Chief Judge of New York Judith Kaye ’62, now of counsel at Skadden, Arps, Slate, Meagher & Flom, received the Judge Edward Weinfeld Award at the 2014 Weinfeld Gala last October. Held at the Morgan Library & Museum, the annual gala celebrates donors who give at the $5,000 level and higher annually, or $1,000 or more during each of their first 10 years as alumni. Dean Trevor Morrison presented the award, which recognizes the professional accomplishments of alumni who graduated 50 years ago or more. He read from a congratulatory letter sent by Chief Judge Jonathan Lippman ’68, who could not attend. In his letter, Lippman praised Kaye for “her erudite and insightful legal opinions, her dynamic leadership of the New York courts, and a legal career that has been so representative of the nobility of our profession.” Lippman continued in a more personal vein, describing Kaye as a mentor and inspiration: “I learned from the master as to how to move the mountains of court reform, while at the same time performing a judge’s critically adjudicative role.” Kaye accepted her award with grace and also admiration for its namesake, Weinfeld. She recalled how awed she was when she appeared as a young lawyer before the legendary federal judge, and how proud she was after the conclusion of that case to receive his letter of praise, which she still considers one of her highest credentials. Kaye reflected on being a woman pioneer in the law, and how “visionary and way ahead of its time” NYU Law had been to accept her as a part-time night student while she was pursuing a career in journalism. Over time, her studies nurtured a love of law and changed the course of her career. Kaye would go on to become the first female partner at Olwine, Connelly, Chase, O’Donnell & See related Weyher. In the judiciary, she wrote notable decisions on issues photo gallery at law.nyu.edu/ ranging from the death penalty to equal rights for gay couples. She media2015 also streamlined the jury system and established specialized courts for drug addiction, domestic violence, and mental health issues. In the 1960s, Kaye recalled in her often-funny acceptance speech, women were assumed to be looking for jobs at law firms to find husbands. She accepted a position at Sullivan & Cromwell, however, to be a litigator. Incidentally, she says, she found her husband there, too. “I got both an LLB and an MRS. Thank you, NYU!” n

Honoring a Noble Judge with the 2014 Weinfeld Award