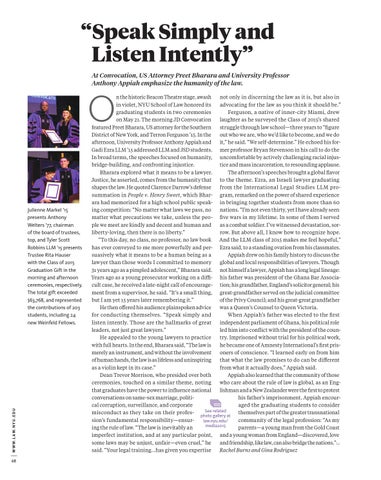 “Speak Simply and Listen Intently” At Convocation, US Attorney Preet Bharara and University Professor Anthony Appiah emphasize the humanity of the law.

Julienne Markel ’15 presents Anthony Welters ’77, chairman of the board of trustees, top, and Tyler Scott Robbins LLM ’15 presents Trustee Rita Hauser with the Class of 2015 Graduation Gift in the morning and afternoon ceremonies, respectively. The total gift exceeded $63,768, and represented the contributions of 203 students, including 24 new Weinfeld Fellows.

n the historic Beacon Theatre stage, awash not only in discerning the law as it is, but also in in violet, NYU School of Law honored its advocating for the law as you think it should be.” graduating students in two ceremonies Ferguson, a native of inner-city Miami, drew on May 21. The morning JD Convocation laughter as he surveyed the Class of 2015’s shared featured Preet Bharara, US attorney for the Southern struggle through law school—three years to “figure District of New York, and Terron Ferguson ’15. In the out who we are, who we’d like to become, and we do afternoon, University Professor Anthony Appiah and it,” he said. “We self-determine.” He echoed his forGadi Ezra LLM ’15 addressed LLM and JSD students. mer professor Bryan Stevenson in his call to do the In broad terms, the speeches focused on humanity, uncomfortable by actively challenging racial injustice and mass incarceration, to resounding applause. bridge-building, and confronting injustice. The afternoon’s speeches brought a global flavor Bharara explored what it means to be a lawyer. Justice, he asserted, comes from the humanity that to the theme. Ezra, an Israeli lawyer graduating shapes the law. He quoted Clarence Darrow’s defense from the International Legal Studies LLM prosummation in People v. Henry Sweet, which Bhar- gram, remarked on the power of shared experience ara had memorized for a high school public speak- in bringing together students from more than 60 nations. “I’m not even thirty, yet I have already seen ing competition: “No matter what laws we pass, no matter what precautions we take, unless the peo- five wars in my lifetime. In some of them I served ple we meet are kindly and decent and human and as a combat soldier. I’ve witnessed devastation, sorrow. But above all, I know how to recognize hope. liberty-loving, then there is no liberty.” And the LLM class of 2015 makes me feel hopeful,” “To this day, no class, no professor, no law book has ever conveyed to me more powerfully and per- Ezra said, to a standing ovation from his classmates. suasively what it means to be a human being as a Appiah drew on his family history to discuss the lawyer than those words I committed to memory global and local responsibilities of lawyers. Though 31 years ago as a pimpled adolescent,” Bharara said. not himself a lawyer, Appiah has a long legal lineage: Years ago as a young prosecutor working on a diffi- his father was president of the Ghana Bar Associacult case, he received a late-night call of encourage- tion; his grandfather, England’s solicitor general; his ment from a supervisor, he said. “It’s a small thing, great-grandfather served on the judicial committee of the Privy Council; and his great-great grandfather but I am yet 15 years later remembering it.” He then offered his audience plainspoken advice was a Queen’s Counsel to Queen Victoria. for conducting themselves. “Speak simply and When Appiah’s father was elected to the first independent parliament of Ghana, his political role listen intently. Those are the hallmarks of great leaders, not just great lawyers.” led him into conflict with the president of the counHe appealed to the young lawyers to practice try. Imprisoned without trial for his political work, with full hearts. In the end, Bharara said, “The law is he became one of Amnesty International’s first prismerely an instrument, and without the involvement oners of conscience. “I learned early on from him of human hands, the law is as lifeless and uninspiring that what the law promises to do can be different as a violin kept in its case.” from what it actually does,” Appiah said. Appiah also learned that the community of those Dean Trevor Morrison, who presided over both ceremonies, touched on a similar theme, noting who care about the rule of law is global, as an Engthat graduates have the power to influence national lishman and a New Zealander were the first to protest conversations on same-sex marriage, politihis father’s imprisonment. Appiah encourcal corruption, surveillance, and corporate aged the graduating students to consider See related misconduct as they take on their profesthemselves part of the greater transnational photo gallery at sion’s fundamental responsibility—ensurcommunity of the legal profession: “As my law.nyu.edu/ media2015 ing the rule of law. “The law is inevitably an parents—a young man from the Gold Coast imperfect institution, and at any particular point, and a young woman from England—discovered, love some laws may be unjust, unfair—even cruel,” he and friendship, like law, can also bridge the nations.” n said. “Your legal training…has given you expertise Rachel Burns and Gina Rodriguez