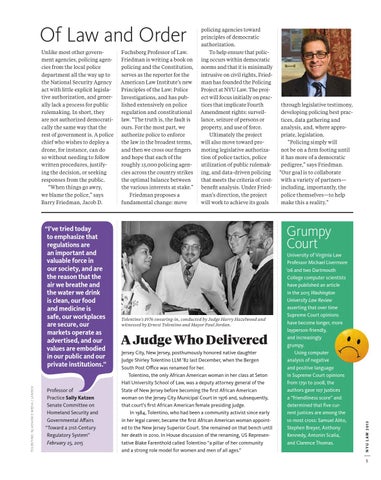 Of Law and Order

“I’ve tried today to emphasize that regulations are an important and valuable force in our society, and are the reason that the air we breathe and the water we drink is clean, our food and medicine is safe, our workplaces are secure, our markets operate as advertised, and our values are embodied in our public and our private institutions.”

Fuchsberg Professor of Law. Friedman is writing a book on policing and the Constitution, serves as the reporter for the American Law Institute’s new Principles of the Law: Police Investigations, and has published extensively on police regulation and constitutional law. “The truth is, the fault is ours. For the most part, we authorize police to enforce the law in the broadest terms, and then we cross our fingers and hope that each of the roughly 15,000 policing agencies across the country strikes the optimal balance between the various interests at stake.” Friedman proposes a fundamental change: move

through legislative testimony, developing policing best practices, data gathering and analysis, and, where appropriate, legislation. “Policing simply will not be on a firm footing until it has more of a democratic pedigree,” says Friedman. “Our goal is to collaborate with a variety of partners— including, importantly, the police themselves—to help make this a reality.”

Unlike most other government agencies, policing agencies from the local police department all the way up to the National Security Agency act with little explicit legislative authorization, and generally lack a process for public rulemaking. In short, they are not authorized democratically the same way that the rest of government is. A police chief who wishes to deploy a drone, for instance, can do so without needing to follow written procedures, justifying the decision, or seeking responses from the public. “When things go awry, we blame the police,” says Barry Friedman, Jacob D.

policing agencies toward principles of democratic authorization. To help ensure that policing occurs within democratic norms and that it is minimally intrusive on civil rights, Friedman has founded the Policing Project at NYU Law. The project will focus initially on practices that implicate Fourth Amendment rights: surveillance, seizure of persons or property, and use of force. Ultimately the project will also move toward promoting legislative authorization of police tactics, police utilization of public rulemaking, and data-driven policing that meets the criteria of costbenefit analysis. Under Friedman’s direction, the project will work to achieve its goals