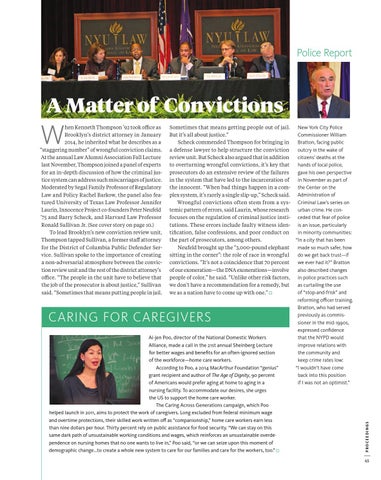 A Matter of Convictions Sometimes that means getting people out of jail. But it’s all about justice.” Scheck commended Thompson for bringing in a defense lawyer to help structure the conviction review unit. But Scheck also argued that in addition to overturning wrongful convictions, it’s key that prosecutors do an extensive review of the failures in the system that have led to the incarceration of the innocent. “When bad things happen in a complex system, it’s rarely a single slip-up,” Scheck said. Wrongful convictions often stem from a systemic pattern of errors, said Laurin, whose research focuses on the regulation of criminal justice institutions. These errors include faulty witness identification, false confessions, and poor conduct on the part of prosecutors, among others. Neufeld brought up the “3,000-pound elephant sitting in the corner”: the role of race in wrongful convictions. “It’s not a coincidence that 70 percent of our exoneration—the DNA exonerations—involve people of color,” he said. “Unlike other risk factors, we don’t have a recommendation for a remedy, but we as a nation have to come up with one.”

CARING FOR CAREGIVERS Ai-jen Poo, director of the National Domestic Workers Alliance, made a call in the 21st annual Sheinberg Lecture for better wages and benefits for an often-ignored section of the workforce—home care workers. According to Poo, a 2014 MacArthur Foundation “genius” grant recipient and author of The Age of Dignity, 90 percent of Americans would prefer aging at home to aging in a nursing facility. To accommodate our desires, she urges the US to support the home care worker. The Caring Across Generations campaign, which Poo helped launch in 2011, aims to protect the work of caregivers. Long excluded from federal minimum wage and overtime protections, their skilled work written off as “companionship,” home care workers earn less than nine dollars per hour. Thirty percent rely on public assistance for food security. “We can stay on this same dark path of unsustainable working conditions and wages, which reinforces an unsustainable overdependence on nursing homes that no one wants to live in,” Poo said, “or we can seize upon this moment of demographic change...to create a whole new system to care for our families and care for the workers, too.”

New York City Police Commissioner William Bratton, facing public outcry in the wake of citizens’ deaths at the hands of local police, gave his own perspective in November as part of the Center on the Administration of Criminal Law’s series on urban crime. He conceded that fear of police is an issue, particularly in minority communities: “In a city that has been made so much safer, how do we get back trust—if we ever had it?” Bratton also described changes in police practices such as curtailing the use of “stop-and-frisk” and reforming officer training. Bratton, who had served previously as commissioner in the mid-1990s, expressed confidence that the NYPD would improve relations with the community and keep crime rates low: “I wouldn’t have come back into this position if I was not an optimist.”

hen Kenneth Thompson ’92 took office as Brooklyn’s district attorney in January 2014, he inherited what he describes as a “staggering number” of wrongful conviction claims. At the annual Law Alumni Association Fall Lecture last November, Thompson joined a panel of experts for an in-depth discussion of how the criminal justice system can address such miscarriages of justice. Moderated by Segal Family Professor of Regulatory Law and Policy Rachel Barkow, the panel also featured University of Texas Law Professor Jennifer Laurin, Innocence Project co-founders Peter Neufeld ’75 and Barry Scheck, and Harvard Law Professor Ronald Sullivan Jr. (See cover story on page 10.) To lead Brooklyn’s new conviction review unit, Thompson tapped Sullivan, a former staff attorney for the District of Columbia Public Defender Service. Sullivan spoke to the importance of creating a non-adversarial atmosphere between the conviction review unit and the rest of the district attorney’s office. “The people in the unit have to believe that the job of the prosecutor is about justice,” Sullivan said. “Sometimes that means putting people in jail.