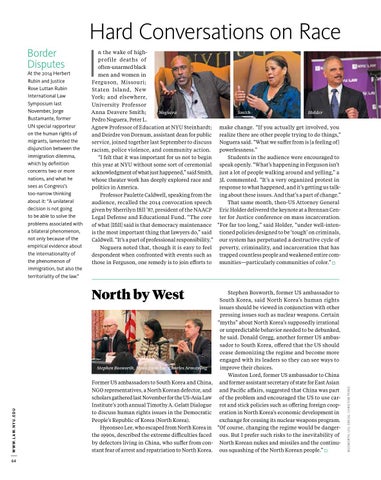 At the 2014 Herbert Rubin and Justice Rose Luttan Rubin International Law Symposium last November, Jorge Bustamante, former UN special rapporteur on the human rights of migrants, lamented the disjunction between the immigration dilemma, which by definition concerns two or more nations, and what he sees as Congress’s too-narrow thinking about it: “A unilateral decision is not going to be able to solve the problems associated with a bilateral phenomenon, not only because of the empirical evidence about the internationality of the phenomenon of immigration, but also the territoriality of the law.”

n the wake of highprof ile deat hs of often-unarmed black men and women in Ferguson, Missouri; Staten Isla nd, New York; and elsewhere, University Professor Noguera Smith Holder Anna Deavere Smith; Pedro Noguera, Peter L. Agnew Professor of Education at NYU Steinhardt; make change. “If you actually get involved, you and Deirdre von Dornum, assistant dean for public realize there are other people trying to do things,” service, joined together last September to discuss Noguera said. “What we suffer from is [a feeling of] racism, police violence, and community action. powerlessness.” “I felt that it was important for us not to begin Students in the audience were encouraged to this year at NYU without some sort of ceremonial speak openly. “What’s happening in Ferguson isn’t acknowledgment of what just happened,” said Smith, just a lot of people walking around and yelling,” a whose theater work has deeply explored race and 3L commented. “It’s a very organized protest in politics in America. response to what happened, and it’s getting us talkProfessor Paulette Caldwell, speaking from the ing about these issues. And that’s a part of change.” audience, recalled the 2014 convocation speech That same month, then-US Attorney General given by Sherrilyn Ifill ’87, president of the NAACP Eric Holder delivered the keynote at a Brennan CenLegal Defense and Educational Fund. “The core ter for Justice conference on mass incarceration. of what [Ifill] said is that democracy maintenance “For far too long,” said Holder, “under well-intentioned policies designed to be ‘tough’ on criminals, is the most important thing that lawyers do,” said Caldwell. “It’s a part of professional responsibility.” our system has perpetuated a destructive cycle of Noguera noted that, though it is easy to feel poverty, criminality, and incarceration that has despondent when confronted with events such as trapped countless people and weakened entire comthose in Ferguson, one remedy is to join efforts to munities—particularly communities of color.”

Stephen Bosworth, former US ambassador to South Korea, said North Korea’s human rights issues should be viewed in conjunction with other pressing issues such as nuclear weapons. Certain “myths” about North Korea’s supposedly irrational or unpredictable behavior needed to be debunked, he said. Donald Gregg, another former US ambassador to South Korea, offered that the US should cease demonizing the regime and become more engaged with its leaders so they can see ways to Stephen Bosworth, Myung-Soo Lee, Charles Armstrong improve their choices. Winston Lord, former US ambassador to China Former US ambassadors to South Korea and China, and former assistant secretary of state for East Asian NGO representatives, a North Korean defector, and and Pacific affairs, suggested that China was part scholars gathered last November for the US-Asia Law of the problem and encouraged the US to use carInstitute’s 20th annual Timothy A. Gelatt Dialogue rot and stick policies such as offering foreign coopto discuss human rights issues in the Democratic eration in North Korea’s economic development in People’s Republic of Korea (North Korea). exchange for ceasing its nuclear weapons program. Hyeonseo Lee, who escaped from North Korea in “Of course, changing the regime would be dangerthe 1990s, described the extreme difficulties faced ous. But I prefer such risks to the inevitability of by defectors living in China, who suffer from con- North Korean nukes and missiles and the continustant fear of arrest and repatriation to North Korea. ous squashing of the North Korean people.”