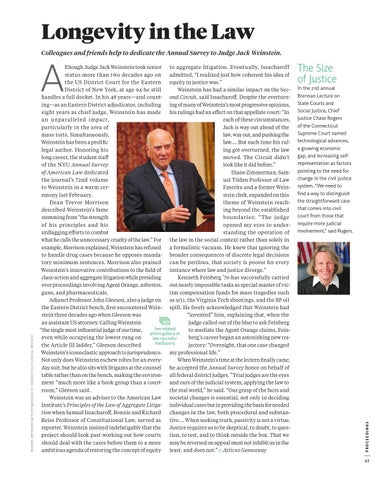 Longevity in the Law Colleagues and friends help to dedicate the Annual Survey to Judge Jack Weinstein.

The Size of Justice

In the 21st annual Brennan Lecture on State Courts and Social Justice, Chief Justice Chase Rogers of the Connecticut Supreme Court named technological advances, a growing economic gap, and increasing selfrepresentation as factors pointing to the need for change in the civil justice system. “We need to find a way to distinguish the straightforward case that comes into civil court from those that require more judicial involvement,” said Rogers.

lthough Judge Jack Weinstein took senior to aggregate litigation. Eventually, Issacharoff status more than two decades ago on admitted, “I realized just how coherent his idea of the US District Court for the Eastern equity in justice was.” District of New York, at age 94 he still Weinstein has had a similar impact on the Sechandles a full docket. In his 48 years—and count- ond Circuit, said Issacharoff. Despite the overturning—as an Eastern District adjudicator, including ing of many of Weinstein’s most progressive opinions, eight years as chief judge, Weinstein has made his rulings had an effect on that appellate court: “In an unpara lleled impact, each of these circumstances, Jack is way out ahead of the particularly in the area of mass torts. Simultaneously, law, way out, and pushing the Weinstein has been a prolific law…. But each time his rullegal author. Honoring his ing got overturned, the law long career, the student staff moved. The Circuit didn’t of the NYU Annual Survey look like it did before.” of American Law dedicated Diane Zimmerman, Samthe journal’s 72nd volume uel Tilden Professor of Law to Weinstein in a warm cerEmerita and a former Weinemony last February. stein clerk, expanded on this Dean Trevor Morrison theme of Weinstein reachdescribed Weinstein’s fame ing beyond the established stemming from “the strength boundaries: “ The judge of his principles and his opened my eyes to underunflagging efforts to combat standing the operation of what he calls the unnecessary cruelty of the law.” For the law in the social context rather than solely in example, Morrison explained, Weinstein has refused a formalistic vacuum. He knew that ignoring the to handle drug cases because he opposes manda- broader consequences of discrete legal decisions tory minimum sentences. Morrison also praised can be perilous, that society is poorer for every Weinstein’s innovative contributions to the field of instance where law and justice diverge.” class-action and aggregate litigation while presiding Kenneth Feinberg ’70 has successfully carried over proceedings involving Agent Orange, asbestos, out nearly impossible tasks as special master of vicguns, and pharmaceuticals. tim compensation funds for mass tragedies such Adjunct Professor John Gleeson, also a judge on as 9/11, the Virginia Tech shootings, and the BP oil the Eastern District bench, first encountered Wein- spill. He freely acknowledged that Weinstein had “invented” him, explaining that, when the stein three decades ago when Gleeson was an assistant US attorney. Calling Weinstein judge called out of the blue to ask Feinberg See related “the single most influential judge of our time, to mediate the Agent Orange claims, Feinphoto gallery at even while occupying the lowest rung on berg’s career began an astonishing new tralaw.nyu.edu/ media2015 the Article III ladder,” Gleeson described jectory: “Overnight, that one case changed Weinstein’s iconoclastic approach to jurisprudence. my professional life.” Not only does Weinstein eschew robes for an everyWhen Weinstein’s time at the lectern finally came, day suit, but he also sits with litigants at the counsel he accepted the Annual Survey honor on behalf of table rather than on the bench, making the environ- all federal district judges. “Trial judges are the eyes ment “much more like a book group than a court- and ears of the judicial system, applying the law to room,” Gleeson said. the real world,” he said. “Our grasp of the facts and societal changes is essential, not only in deciding Weinstein was an adviser to the American Law Institute’s Principles of the Law of Aggregate Litiga- individual cases but in providing the basis for needed changes in the law, both procedural and substantion when Samuel Issacharoff, Bonnie and Richard Reiss Professor of Constitutional Law, served as tive.… When seeking truth, passivity is not a virtue. reporter. Weinstein insisted indefatigably that the Justice requires us to be skeptical, to doubt, to quesproject should look past working out how courts tion, to test, and to think outside the box. That we should deal with the cases before them to a more may be reversed on appeal must not inhibit us in the ambitious agenda of restoring the concept of equity least, and does not.” Atticus Gannaway