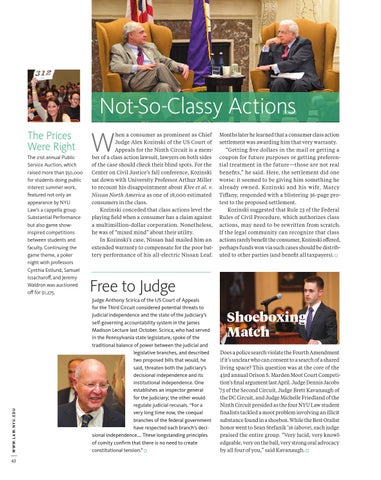 Not-So-Classy Actions The Prices Were Right

The 21st annual Public Service Auction, which raised more than $50,000 for students doing public interest summer work, featured not only an appearance by NYU Law’s a cappella group Substantial Performance but also game showinspired competitions between students and faculty. Continuing the game theme, a poker night with professors Cynthia Estlund, Samuel Issacharoff, and Jeremy Waldron was auctioned off for $1,275.

hen a consumer as prominent as Chief Judge Alex Kozinski of the US Court of Appeals for the Ninth Circuit is a member of a class action lawsuit, lawyers on both sides of the case should check their blind spots. For the Center on Civil Justice’s fall conference, Kozinski sat down with University Professor Arthur Miller to recount his disappointment about Klee et al. v. Nissan North America as one of 18,000 estimated consumers in the class. Kozinski conceded that class actions level the playing field when a consumer has a claim against a multimillion-dollar corporation. Nonetheless, he was of “mixed mind” about their utility. In Kozinski’s case, Nissan had mailed him an extended warranty to compensate for the poor battery performance of his all-electric Nissan Leaf.

Months later he learned that a consumer class action settlement was awarding him that very warranty. “Getting five dollars in the mail or getting a coupon for future purposes or getting preferential treatment in the future—those are not real benefits,” he said. Here, the settlement did one worse: it seemed to be giving him something he already owned. Kozinski and his wife, Marcy Tiffany, responded with a blistering 36-page protest to the proposed settlement. Kozinski suggested that Rule 23 of the Federal Rules of Civil Procedure, which authorizes class actions, may need to be rewritten from scratch. If the legal community can recognize that class actions rarely benefit the consumer, Kozinski offered, perhaps funds won via such cases should be distributed to other parties (and benefit all taxpayers).

Free to Judge Judge Anthony Scirica of the US Court of Appeals for the Third Circuit considered potential threats to judicial independence and the state of the judiciary’s self-governing accountability system in the James Madison Lecture last October. Scirica, who had served in the Pennsylvania state legislature, spoke of the traditional balance of power between the judicial and legislative branches, and described two proposed bills that would, he said, threaten both the judiciary’s decisional independence and its institutional independence. One establishes an inspector general for the judiciary; the other would regulate judicial recusals. “For a very long time now, the coequal branches of the federal government have respected each branch’s decisional independence…. These longstanding principles of comity confirm that there is no need to create constitutional tension.”

Shoeboxing Match Does a police search violate the Fourth Amendment if it’s unclear who can consent to a search of a shared living space? This question was at the core of the 43rd annual Orison S. Marden Moot Court Competition’s final argument last April. Judge Dennis Jacobs ’73 of the Second Circuit, Judge Brett Kavanaugh of the DC Circuit, and Judge Michelle Friedland of the Ninth Circuit presided as the four NYU Law student finalists tackled a moot problem involving an illicit substance found in a shoebox. While the Best Oralist honor went to Sean Stefanik ’16 (above), each judge praised the entire group. “Very lucid, very knowledgeable, very on the ball, very strong oral advocacy by all four of you,” said Kavanaugh.