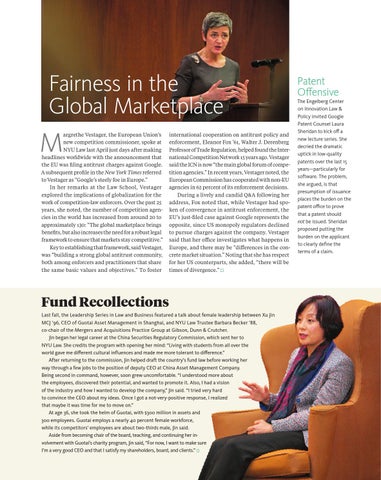 Fairness in the Global Marketplace

argrethe Vestager, the European Union’s new competition commissioner, spoke at NYU Law last April just days after making headlines worldwide with the announcement that the EU was filing antitrust charges against Google. A subsequent profile in the New York Times referred to Vestager as “Google’s steely foe in Europe.” In her remarks at the Law School, Vestager explored the implications of globalization for the work of competition-law enforcers. Over the past 25 years, she noted, the number of competition agencies in the world has increased from around 20 to approximately 130: “The global marketplace brings benefits, but also increases the need for a robust legal framework to ensure that markets stay competitive.” Key to establishing that framework, said Vestager, was “building a strong global antitrust community, both among enforcers and practitioners that share the same basic values and objectives.” To foster

international cooperation on antitrust policy and enforcement, Eleanor Fox ’61, Walter J. Derenberg Professor of Trade Regulation, helped found the International Competition Network 15 years ago. Vestager said the ICN is now “the main global forum of competition agencies.” In recent years, Vestager noted, the European Commission has cooperated with non-EU agencies in 62 percent of its enforcement decisions. During a lively and candid Q&A following her address, Fox noted that, while Vestager had spoken of convergence in antitrust enforcement, the EU’s just-filed case against Google represents the opposite, since US monopoly regulators declined to pursue charges against the company. Vestager said that her office investigates what happens in Europe, and there may be “differences in the concrete market situation.” Noting that she has respect for her US counterparts, she added, “there will be times of divergence.”

The Engelberg Center on Innovation Law & Policy invited Google Patent Counsel Laura Sheridan to kick off a new lecture series. She decried the dramatic uptick in low-quality patents over the last 15 years—particularly for software. The problem, she argued, is that presumption of issuance places the burden on the patent office to prove that a patent should not be issued. Sheridan proposed putting the burden on the applicant to clearly define the terms of a claim.

Last fall, the Leadership Series in Law and Business featured a talk about female leadership between Xu Jin MCJ ’96, CEO of Guotai Asset Management in Shanghai, and NYU Law Trustee Barbara Becker ’88, co-chair of the Mergers and Acquisitions Practice Group at Gibson, Dunn & Crutcher. Jin began her legal career at the China Securities Regulatory Commission, which sent her to NYU Law. She credits the program with opening her mind: “Living with students from all over the world gave me different cultural influences and made me more tolerant to difference.” After returning to the commission, Jin helped draft the country’s fund law before working her way through a few jobs to the position of deputy CEO at China Asset Management Company. Being second in command, however, soon grew uncomfortable. “I understood more about the employees, discovered their potential, and wanted to promote it. Also, I had a vision of the industry and how I wanted to develop the company,” Jin said. “I tried very hard to convince the CEO about my ideas. Once I got a not-very-positive response, I realized that maybe it was time for me to move on.” At age 36, she took the helm of Guotai, with $300 million in assets and 300 employees. Guotai employs a nearly 40 percent female workforce, while its competitors’ employees are about two-thirds male, Jin said. Aside from becoming chair of the board, teaching, and continuing her involvement with Guotai’s charity program, Jin said, “For now, I want to make sure I’m a very good CEO and that I satisfy my shareholders, board, and clients.”