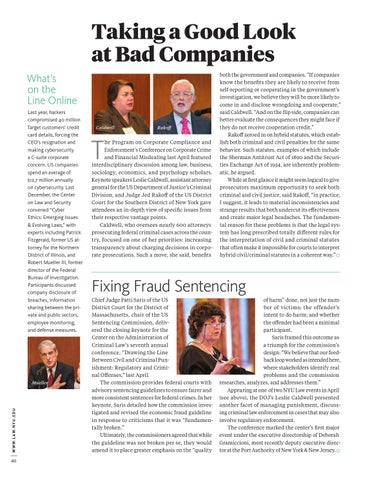 he Program on Corporate Compliance and Enforcement’s Conference on Corporate Crime and Financial Misdealing last April featured interdisciplinary discussion among law, business, sociology, economics, and psychology scholars. Keynote speakers Leslie Caldwell, assistant attorney general for the US Department of Justice’s Criminal Division, and Judge Jed Rakoff of the US District Court for the Southern District of New York gave attendees an in-depth view of specific issues from their respective vantage points. Caldwell, who oversees nearly 600 attorneys prosecuting federal criminal cases across the country, focused on one of her priorities: increasing transparency about charging decisions in corporate prosecutions. Such a move, she said, benefits

both the government and companies. “If companies know the benefits they are likely to receive from self-reporting or cooperating in the government’s investigation, we believe they will be more likely to come in and disclose wrongdoing and cooperate,” said Caldwell. “And on the flip side, companies can better evaluate the consequences they might face if they do not receive cooperation credit.” Rakoff zeroed in on hybrid statutes, which establish both criminal and civil penalties for the same behavior. Such statutes, examples of which include the Sherman Antitrust Act of 1890 and the Securities Exchange Act of 1934, are inherently problematic, he argued. While at first glance it might seem logical to give prosecutors maximum opportunity to seek both criminal and civil justice, said Rakoff, “in practice, I suggest, it leads to material inconsistencies and strange results that both undercut its effectiveness and create major legal headaches. The fundamental reason for these problems is that the legal system has long prescribed totally different rules for the interpretation of civil and criminal statutes that often make it impossible for courts to interpret hybrid civil/criminal statutes in a coherent way.”

Fixing Fraud Sentencing Chief Judge Patti Saris of the US District Court for the District of Massachusetts, chair of the US Sentencing Commission, delivered the closing keynote for the Center on the Administration of Criminal Law’s seventh annual conference, “Drawing the Line Between Civil and Criminal Punishment: Regulatory and Criminal Offenses,” last April. The commission provides federal courts with advisory sentencing guidelines to ensure fairer and more consistent sentences for federal crimes. In her keynote, Saris detailed how the commission investigated and revised the economic fraud guideline in response to criticisms that it was “fundamentally broken.” Ultimately, the commissioners agreed that while the guideline was not broken per se, they would amend it to place greater emphasis on the “quality

of harm” done, not just the number of victims; the offender’s intent to do harm; and whether the offender had been a minimal participant. Saris framed this outcome as a triumph for the commission’s design: “We believe that our feedback loop worked as intended here, where stakeholders identify real problems and the commission researches, analyzes, and addresses them.” Appearing at one of two NYU Law events in April (see above), the DOJ’s Leslie Caldwell presented another facet of managing punishment, discussing criminal law enforcement in cases that may also involve regulatory enforcement. The conference marked the center’s first major event under the executive directorship of Deborah Gramiccioni, most recently deputy executive director at the Port Authority of New York & New Jersey.