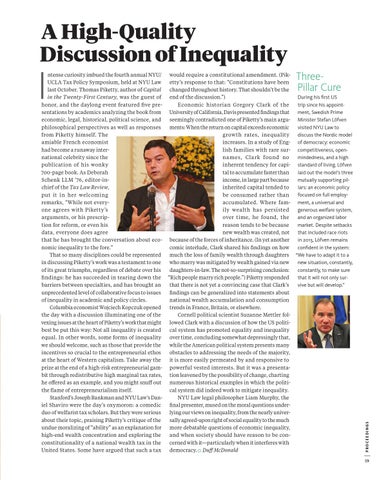 A High-Quality Discussion of Inequality would require a constitutional amendment. (Piketty’s response to that: “Constitutions have been changed throughout history. That shouldn’t be the end of the discussion.”) Economic historian Gregory Clark of the University of California, Davis presented findings that seemingly contradicted one of Piketty’s main arguments: When the return on capital exceeds economic growth rates, inequality increases. In a study of English families with rare surna mes, Cla rk found no inherent tendency for capital to accumulate faster than income, in large part because inherited capital tended to be consumed rather than accumulated. Where family wealth has persisted over time, he found, the reason tends to be because new wealth was created, not because of the forces of inheritance. (In yet another comic interlude, Clark shared his findings on how much the loss of family wealth through daughters who marry was mitigated by wealth gained via new daughters-in-law. The not-so-surprising conclusion: “Rich people marry rich people.”) Piketty responded that there is not yet a convincing case that Clark’s findings can be generalized into statements about national wealth accumulation and consumption trends in France, Britain, or elsewhere. Cornell political scientist Suzanne Mettler followed Clark with a discussion of how the US political system has promoted equality and inequality over time, concluding somewhat depressingly that, while the American political system presents many obstacles to addressing the needs of the majority, it is more easily permeated by and responsive to powerful vested interests. But it was a presentation leavened by the possibility of change, charting numerous historical examples in which the political system did indeed work to mitigate inequality. NYU Law legal philosopher Liam Murphy, the final presenter, mused on the moral questions underlying our views on inequality, from the nearly universally agreed-upon right of social equality to the much more debatable questions of economic inequality, and when society should have reason to be concerned with it—particularly when it interferes with democracy. Duff McDonald

ThreePillar Cure During his first US trip since his appointment, Swedish Prime Minister Stefan Löfven visited NYU Law to discuss the Nordic model of democracy: economic competitiveness, openmindedness, and a high standard of living. Löfven laid out the model’s three mutually supporting pillars: an economic policy focused on full employment, a universal and generous welfare system, and an organized labor market. Despite setbacks that included race riots in 2013, Löfven remains confident in the system: “We have to adapt it to a new situation, constantly, constantly, to make sure that it will not only survive but will develop.”

ntense curiosity imbued the fourth annual NYU/ UCLA Tax Policy Symposium, held at NYU Law last October. Thomas Piketty, author of Capital in the Twenty-First Century, was the guest of honor, and the daylong event featured five presentations by academics analyzing the book from economic, legal, historical, political science, and philosophical perspectives as well as responses from Piketty himself. The amiable French economist had become a runaway international celebrity since the publication of his wonky 700-page book. As Deborah Schenk LLM ’76, editor-inchief of the Tax Law Review, put it in her welcoming remarks, “While not everyone agrees with Piketty’s arguments, or his prescription for reform, or even his data, everyone does agree that he has brought the conversation about economic inequality to the fore.” That so many disciplines could be represented in discussing Piketty’s work was a testament to one of its great triumphs, regardless of debate over his findings: he has succeeded in tearing down the barriers between specialties, and has brought an unprecedented level of collaborative focus to issues of inequality in academic and policy circles. Columbia economist Wojciech Kopczuk opened the day with a discussion illuminating one of the vexing issues at the heart of Piketty’s work that might best be put this way: Not all inequality is created equal. In other words, some forms of inequality we should welcome, such as those that provide the incentives so crucial to the entrepreneurial ethos at the heart of Western capitalism. Take away the prize at the end of a high-risk entrepreneurial gambit through redistributive high marginal tax rates, he offered as an example, and you might snuff out the flame of entrepreneurialism itself. Stanford’s Joseph Bankman and NYU Law’s Daniel Shaviro were the day’s oxymoron: a comedic duo of welfarist tax scholars. But they were serious about their topic, praising Piketty’s critique of the undue moralizing of “ability” as an explanation for high-end wealth concentration and exploring the constitutionality of a national wealth tax in the United States. Some have argued that such a tax