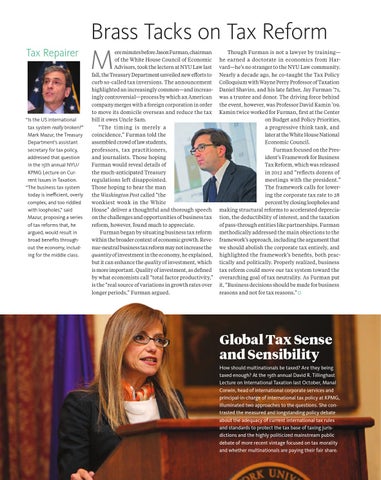 “Is the US international tax system really broken?” Mark Mazur, the Treasury Department’s assistant secretary for tax policy, addressed that question in the 15th annual NYU/ KPMG Lecture on Current Issues in Taxation. “The business tax system today is inefficient, overly complex, and too riddled with loopholes,” said Mazur, proposing a series of tax reforms that, he argued, would result in broad benefits throughout the economy, including for the middle class.

ere minutes before Jason Furman, chairman of the White House Council of Economic Advisors, took the lectern at NYU Law last fall, the Treasury Department unveiled new efforts to curb so-called tax inversions. The announcement highlighted an increasingly common—and increasingly controversial—process by which an American company merges with a foreign corporation in order to move its domicile overseas and reduce the tax bill it owes Uncle Sam. “The timing is merely a coincidence,” Furman told the assembled crowd of law students, professors, tax practitioners, and journalists. Those hoping Furman would reveal details of the much-anticipated Treasury regulations left disappointed. Those hoping to hear the man the Washington Post called “the wonkiest wonk in the White House” deliver a thoughtful and thorough speech on the challenges and opportunities of business tax reform, however, found much to appreciate. Furman began by situating business tax reform within the broader context of economic growth. Revenue-neutral business tax reform may not increase the quantity of investment in the economy, he explained, but it can enhance the quality of investment, which is more important. Quality of investment, as defined by what economists call “total factor productivity,” is the “real source of variations in growth rates over longer periods,” Furman argued.

Though Furman is not a lawyer by training— he earned a doctorate in economics from Harvard—he’s no stranger to the NYU Law community. Nearly a decade ago, he co-taught the Tax Policy Colloquium with Wayne Perry Professor of Taxation Daniel Shaviro, and his late father, Jay Furman ’71, was a trustee and donor. The driving force behind the event, however, was Professor David Kamin ’09. Kamin twice worked for Furman, first at the Center on Budget and Policy Priorities, a progressive think tank, and later at the White House National Economic Council. Furman focused on the President’s Framework for Business Tax Reform, which was released in 2012 and “reflects dozens of meetings with the president.” The framework calls for lowering the corporate tax rate to 28 percent by closing loopholes and making structural reforms to accelerated depreciation, the deductibility of interest, and the taxation of pass-through entities like partnerships. Furman methodically addressed the main objections to the framework’s approach, including the argument that we should abolish the corporate tax entirely, and highlighted the framework’s benefits, both practically and politically. Properly realized, business tax reform could move our tax system toward the overarching goal of tax neutrality. As Furman put it, “Business decisions should be made for business reasons and not for tax reasons.”

How should multinationals be taxed? Are they being taxed enough? At the 19th annual David R. Tillinghast Lecture on International Taxation last October, Manal Corwin, head of international corporate services and principal-in-charge of international tax policy at KPMG, illuminated two approaches to the questions. She contrasted the measured and longstanding policy debate about the adequacy of current international tax rules and standards to protect the tax base of taxing jurisdictions and the highly politicized mainstream public debate of more recent vintage focused on tax morality and whether multinationals are paying their fair share.