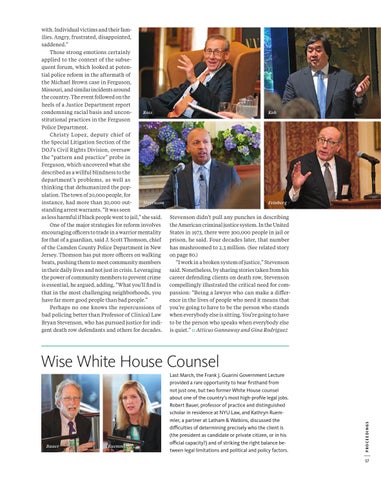 with. Individual victims and their families. Angry, frustrated, disappointed, saddened.” Those strong emotions certainly applied to the context of the subsequent forum, which looked at potential police reform in the aftermath of the Michael Brown case in Ferguson, Missouri, and similar incidents around the country. The event followed on the heels of a Justice Department report condemning racial basis and unconRoss stitutional practices in the Ferguson Police Department. Christy Lopez, deputy chief of the Special Litigation Section of the DOJ’s Civil Rights Division, oversaw the “pattern and practice” probe in Ferguson, which uncovered what she described as a willful blindness to the department’s problems, as well as thinking that dehumanized the population. The town of 20,000 people, for instance, had more than 30,000 outStevenson standing arrest warrants. “It was seen as less harmful if black people went to jail,” she said. One of the major strategies for reform involves encouraging officers to trade in a warrior mentality for that of a guardian, said J. Scott Thomson, chief of the Camden County Police Department in New Jersey. Thomson has put more officers on walking beats, pushing them to meet community members in their daily lives and not just in crisis. Leveraging the power of community members to prevent crime is essential, he argued, adding, “What you’ll find is that in the most challenging neighborhoods, you have far more good people than bad people.” Perhaps no one knows the repercussions of bad policing better than Professor of Clinical Law Bryan Stevenson, who has pursued justice for indigent death row defendants and others for decades.

Stevenson didn’t pull any punches in describing the American criminal justice system. In the United States in 1973, there were 300,000 people in jail or prison, he said. Four decades later, that number has mushroomed to 2.3 million. (See related story on page 80.) “I work in a broken system of justice,” Stevenson said. Nonetheless, by sharing stories taken from his career defending clients on death row, Stevenson compellingly illustrated the critical need for compassion: “Being a lawyer who can make a difference in the lives of people who need it means that you’re going to have to be the person who stands when everybody else is sitting. You’re going to have to be the person who speaks when everybody else is quiet.” Atticus Gannaway and Gina Rodriguez

Last March, the Frank J. Guarini Government Lecture provided a rare opportunity to hear firsthand from not just one, but two former White House counsel about one of the country’s most high-profile legal jobs. Robert Bauer, professor of practice and distinguished scholar in residence at NYU Law, and Kathryn Ruemmler, a partner at Latham & Watkins, discussed the difficulties of determining precisely who the client is (the president as candidate or private citizen, or in his official capacity?) and of striking the right balance between legal limitations and political and policy factors.