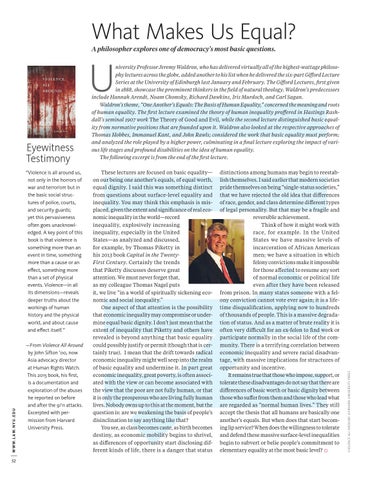 What Makes Us Equal? A philosopher explores one of democracy’s most basic questions.

“Violence is all around us, not only in the horrors of war and terrorism but in the basic social structures of police, courts, and security guards; yet this pervasiveness often goes unacknowledged. A key point of this book is that violence is something more than an event in time, something more than a cause or an effect, something more than a set of physical events. Violence—in all its dimensions—reveals deeper truths about the workings of human history and the physical world, and about cause and effect itself. ”

—From Violence All Around by John Sifton ’00, now Asia advocacy director at Human Rights Watch. This 2015 book, his first, is a documentation and exploration of the abuses he reported on before and after the 9/11 attacks. Excerpted with permission from Harvard University Press.

These lectures are focused on basic equality— on our being one another’s equals, of equal worth, equal dignity. I said this was something distinct from questions about surface-level equality and inequality. You may think this emphasis is misplaced, given the extent and significance of real economic inequality in the world—record inequality, explosively increasing inequality, especially in the United States—as analyzed and discussed, for example, by Thomas Piketty in his 2013 book Capital in the TwentyFirst Century. Certainly the trends that Piketty discusses deserve great attention. We must never forget that, as my colleague Thomas Nagel puts it, we live “in a world of spiritually sickening economic and social inequality.” One aspect of that attention is the possibility that economic inequality may compromise or undermine equal basic dignity. I don’t just mean that the extent of inequality that Piketty and others have revealed is beyond anything that basic equality could possibly justify or permit (though that is certainly true). I mean that the drift towards radical economic inequality might well seep into the realm of basic equality and undermine it. In part great economic inequality, great poverty, is often associated with the view or can become associated with the view that the poor are not fully human, or that it is only the prosperous who are living fully human lives. Nobody owns up to this at the moment, but the question is: are we weakening the basis of people’s disinclination to say anything like that? You see, as class becomes caste, as birth becomes destiny, as economic mobility begins to shrivel, as differences of opportunity start disclosing different kinds of life, there is a danger that status

distinctions among humans may begin to reestablish themselves. I said earlier that modern societies pride themselves on being “single-status societies,” that we have rejected the old idea that differences of race, gender, and class determine different types of legal personality. But that may be a fragile and reversible achievement. Think of how it might work with race, for example. In the United States we have massive levels of incarceration of African American men; we have a situation in which felony convictions make it impossible for those affected to resume any sort of normal economic or political life even after they have been released from prison. In many states someone with a felony conviction cannot vote ever again; it is a lifetime disqualification, applying now to hundreds of thousands of people. This is a massive degradation of status. And as a matter of brute reality it is often very difficult for an ex-felon to find work or participate normally in the social life of the community. There is a terrifying correlation between economic inequality and severe racial disadvantage, with massive implications for structures of opportunity and incentive. It remains true that those who impose, support, or tolerate these disadvantages do not say that there are differences of basic worth or basic dignity between those who suffer from them and those who lead what are regarded as “normal human lives.” They still accept the thesis that all humans are basically one another’s equals. But when does that start becoming lip service? When does the willingness to tolerate and defend these massive surface-level inequalities begin to subvert or belie people’s commitment to elementary equality at the most basic level?

niversity Professor Jeremy Waldron, who has delivered virtually all of the highest-wattage philosophy lectures across the globe, added another to his list when he delivered the six-part Gifford Lecture Series at the University of Edinburgh last January and February. The Gifford Lectures, first given in 1888, showcase the preeminent thinkers in the field of natural theology. Waldron’s predecessors include Hannah Arendt, Noam Chomsky, Richard Dawkins, Iris Murdoch, and Carl Sagan. Waldron’s theme, “One Another’s Equals: The Basis of Human Equality,” concerned the meaning and roots of human equality. The first lecture examined the theory of human inequality proffered in Hastings Rashdall’s seminal 1907 work The Theory of Good and Evil, while the second lecture distinguished basic equality from normative positions that are founded upon it. Waldron also looked at the respective approaches of Thomas Hobbes, Immanuel Kant, and John Rawls; considered the work that basic equality must perform; and analyzed the role played by a higher power, culminating in a final lecture exploring the impact of various life stages and profound disabilities on the idea of human equality. The following excerpt is from the end of the first lecture.