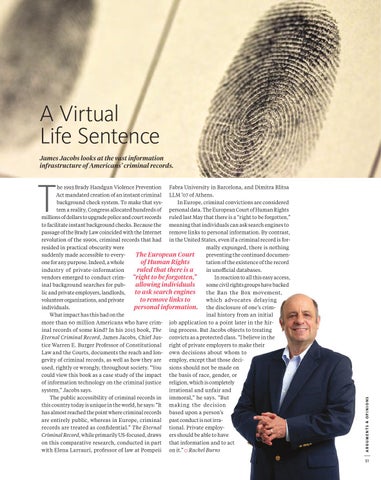 he 1993 Brady Handgun Violence Prevention Fabra University in Barcelona, and Dimitra Blitsa LLM ’07 of Athens. Act mandated creation of an instant criminal background check system. To make that sysIn Europe, criminal convictions are considered tem a reality, Congress allocated hundreds of personal data. The European Court of Human Rights millions of dollars to upgrade police and court records ruled last May that there is a “right to be forgotten,” to facilitate instant background checks. Because the meaning that individuals can ask search engines to passage of the Brady Law coincided with the Internet remove links to personal information. By contrast, revolution of the 1990s, criminal records that had in the United States, even if a criminal record is forresided in practical obscurity were mally expunged, there is nothing The European Court suddenly made accessible to everypreventing the continued documenof Human Rights one for any purpose. Indeed, a whole tation of the existence of the record ruled that there is a industry of private-information in unofficial databases. vendors emerged to conduct crim- “right to be forgotten,” In reaction to all this easy access, allowing individuals inal background searches for pubsome civil rights groups have backed to ask search engines lic and private employers, landlords, the Ban the Box movement, to remove links to volunteer organizations, and private which advocates delaying personal information. the disclosure of one’s crimindividuals. What impact has this had on the inal history from an initial more than 60 million Americans who have crim- job application to a point later in the hirinal records of some kind? In his 2015 book, The ing process. But Jacobs objects to treating Eternal Criminal Record, James Jacobs, Chief Jus- convicts as a protected class. “I believe in the tice Warren E. Burger Professor of Constitutional right of private employers to make their Law and the Courts, documents the reach and lon- own decisions about whom to employ, except that those decigevity of criminal records, as well as how they are sions should not be made on used, rightly or wrongly, throughout society. “You the basis of race, gender, or could view this book as a case study of the impact of information technology on the criminal justice religion, which is completely system,” Jacobs says. irrational and unfair and The public accessibility of criminal records in immoral,” he says. “But this country today is unique in the world, he says: “It making the decision has almost reached the point where criminal records based upon a person’s are entirely public, whereas in Europe, criminal past conduct is not irrarecords are treated as confidential.” The Eternal tional. Private employCriminal Record, while primarily US-focused, draws ers should be able to have on this comparative research, conducted in part that information and to act with Elena Larrauri, professor of law at Pompeii on it.” Rachel Burns