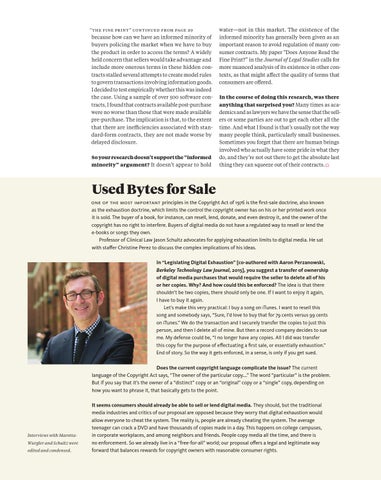 “the fine print” continued from page 49

because how can we have an informed minority of buyers policing the market when we have to buy the product in order to access the terms? A widely held concern that sellers would take advantage and include more onerous terms in these hidden contracts stalled several attempts to create model rules to govern transactions involving information goods. I decided to test empirically whether this was indeed the case. Using a sample of over 500 software contracts, I found that contracts available post-purchase were no worse than those that were made available pre-purchase. The implication is that, to the extent that there are inefficiencies associated with standard-form contracts, they are not made worse by delayed disclosure. So your research doesn’t support the “informed minority” argument? It doesn’t appear to hold

water—not in this market. The existence of the informed minority has generally been given as an important reason to avoid regulation of many consumer contracts. My paper “Does Anyone Read the Fine Print?” in the Journal of Legal Studies calls for more nuanced analysis of its existence in other contexts, as that might affect the quality of terms that consumers are offered. In the course of doing this research, was there anything that surprised you? Many times as academics and as lawyers we have the sense that the sellers or some parties are out to get each other all the time. And what I found is that’s usually not the way many people think, particularly small businesses. Sometimes you forget that there are human beings involved who actually have some pride in what they do, and they’re not out there to get the absolute last thing they can squeeze out of their contracts.

Used Bytes for Sale one of the most important principles in the Copyright Act of 1976 is the first-sale doctrine, also known as the exhaustion doctrine, which limits the control the copyright owner has on his or her printed work once it is sold. The buyer of a book, for instance, can resell, lend, donate, and even destroy it, and the owner of the copyright has no right to interfere. Buyers of digital media do not have a regulated way to resell or lend the e-books or songs they own. Professor of Clinical Law Jason Schultz advocates for applying exhaustion limits to digital media. He sat with staffer Christine Perez to discuss the complex implications of his ideas. In “Legislating Digital Exhaustion” [co-authored with Aaron Perzanowski, Berkeley Technology Law Journal, 2015], you suggest a transfer of ownership of digital media purchases that would require the seller to delete all of his or her copies. Why? And how could this be enforced? The idea is that there shouldn’t be two copies, there should only be one. If I want to enjoy it again, I have to buy it again. Let’s make this very practical: I buy a song on iTunes. I want to resell this song and somebody says, “Sure, I’d love to buy that for 79 cents versus 99 cents on iTunes.” We do the transaction and I securely transfer the copies to just this person, and then I delete all of mine. But then a record company decides to sue me. My defense could be, “I no longer have any copies. All I did was transfer this copy for the purpose of effectuating a first sale, or essentially exhaustion.” End of story. So the way it gets enforced, in a sense, is only if you get sued.

Does the current copyright language complicate the issue? The current language of the Copyright Act says, “The owner of the particular copy….” The word “particular” is the problem. But if you say that it’s the owner of a “distinct” copy or an “original” copy or a “single” copy, depending on how you want to phrase it, that basically gets to the point.

Interviews with MarottaWurgler and Schultz were edited and condensed.

It seems consumers should already be able to sell or lend digital media. They should, but the traditional media industries and critics of our proposal are opposed because they worry that digital exhaustion would allow everyone to cheat the system. The reality is, people are already cheating the system. The average teenager can crack a DVD and have thousands of copies made in a day. This happens on college campuses, in corporate workplaces, and among neighbors and friends. People copy media all the time, and there is no enforcement. So we already live in a “free-for-all” world; our proposal offers a legal and legitimate way forward that balances rewards for copyright owners with reasonable consumer rights.