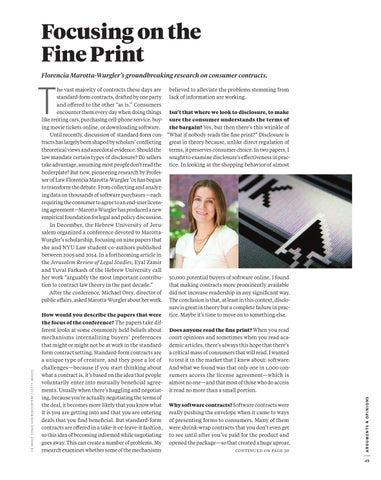 he vast majority of contracts these days are believed to alleviate the problems stemming from standard-form contracts, drafted by one party lack of information are working. and offered to the other “as is.” Consumers encounter them every day when doing things Isn’t that where we look to disclosure, to make like renting cars, purchasing cell-phone service, buy- sure the consumer understands the terms of ing movie tickets online, or downloading software. the bargain? Yes, but then there’s this wrinkle of Until recently, discussion of standard-form con- “What if nobody reads the fine print?” Disclosure is tracts has largely been shaped by scholars’ conflicting great in theory because, unlike direct regulation of theoretical views and anecdotal evidence. Should the terms, it preserves consumer choice. In two papers, I law mandate certain types of disclosure? Do sellers sought to examine disclosure’s effectiveness in practake advantage, assuming most people don’t read the tice. In looking at the shopping behavior of almost boilerplate? But now, pioneering research by Professor of Law Florencia Marotta-Wurgler ’01 has begun to transform the debate. From collecting and analyzing data on thousands of software purchases—each requiring the consumer to agree to an end-user licensing agreement—Marotta-Wurgler has produced a new empirical foundation for legal and policy discussion. In December, the Hebrew University of Jerusalem organized a conference devoted to MarottaWurgler’s scholarship, focusing on nine papers that she and NYU Law student co-authors published between 2005 and 2014. In a forthcoming article in the Jerusalem Review of Legal Studies, Eyal Zamir and Yuval Farkash of the Hebrew University call her work “arguably the most important contribu- 50,000 potential buyers of software online, I found tion to contract law theory in the past decade.” that making contracts more prominently available After the conference, Michael Orey, director of did not increase readership in any significant way. public affairs, asked Marotta-Wurgler about her work. The conclusion is that, at least in this context, disclosure is great in theory but a complete failure in pracHow would you describe the papers that were tice. Maybe it’s time to move on to something else. the focus of the conference? The papers take different looks at some commonly held beliefs about Does anyone read the fine print? When you read mechanisms internalizing buyers’ preferences court opinions and sometimes when you read acathat might or might not be at work in the standard- demic articles, there’s always this hope that there’s form contract setting. Standard-form contracts are a critical mass of consumers that will read. I wanted a unique type of creature, and they pose a lot of to test it in the market that I knew about: software. challenges—because if you start thinking about And what we found was that only one in 1,000 conwhat a contract is, it’s based on the idea that people sumers access the license agreement—which is voluntarily enter into mutually beneficial agree- almost no one—and that most of those who do access ments. Usually when there’s haggling and negotiat- it read no more than a small portion. ing, because you’re actually negotiating the terms of the deal, it becomes more likely that you know what Why software contracts? Software contracts were it is you are getting into and that you are entering really pushing the envelope when it came to ways deals that you find beneficial. But standard-form of presenting forms to consumers. Many of them contracts are offered in a take-it-or-leave-it fashion, were shrink-wrap contracts that you don’t even get so this idea of becoming informed while negotiating to see until after you’ve paid for the product and goes away. This can create a number of problems. My opened the package—so that created a huge uproar, research examines whether some of the mechanisms continued on page 50