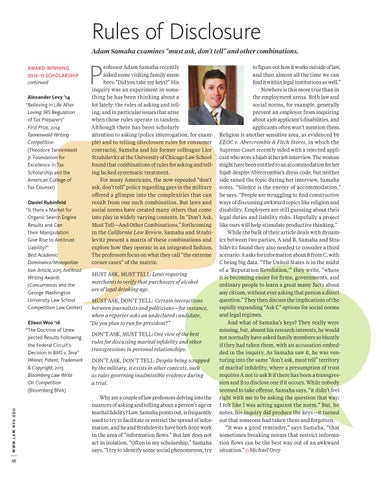 rofessor Adam Samaha recently asked some visiting family members: “Did you take my keys?” His inquiry was an experiment in something he has been thinking about a lot lately: the rules of asking and telling, and in particular issues that arise when those rules operate in tandem. Although there has been scholarly attention to asking (police interrogation, for example) and to telling (disclosure rules for consumer contracts), Samaha and his former colleague Lior Strahilevitz at the University of Chicago Law School found that combinations of rules for asking and telling lacked systematic treatment. For many Americans, the now-repealed “don’t ask, don’t tell” policy regarding gays in the military offered a glimpse into the complexities that can result from one such combination. But laws and social norms have created many others that come into play in widely varying contexts. In “Don’t Ask, Must Tell—And Other Combinations,” forthcoming in the California Law Review, Samaha and Strahilevitz present a matrix of these combinations and explore how they operate in an integrated fashion. The professors focus on what they call “the extreme corner cases” of the matrix: MUST ASK, MUST TELL: Laws requiring merchants to verify that purchasers of alcohol are of legal drinking age.

 UST ASK, DON’T TELL: Certain interactions M between journalists and politicians—for instance, when a reporter asks an undeclared candidate, “Do you plan to run for president?” DON’T ASK, MUST TELL: One view of the best rules for discussing marital infidelity and other transgressions in personal relationships. DON’T ASK, DON’T TELL: Despite being scrapped by the military, it exists in other contexts, such as rules governing inadmissible evidence during a trial. Why are a couple of law professors delving into the nuances of asking and telling about a person’s age or marital fidelity? Law, Samaha points out, is frequently used to try to facilitate or restrict the spread of information, and he and Strahilevitz have both done work in the area of “information flows.” But law does not act in isolation. “Often in my scholarship,” Samaha says, “I try to identify some social phenomenon, try

to figure out how it works outside of law, and then almost all the time we can find it within legal institutions as well.” Nowhere is this more true than in the employment arena. Both law and social norms, for example, generally prevent an employer from inquiring about a job applicant’s disabilities, and applicants often won’t mention them. Religion is another sensitive area, as evidenced by EEOC v. Abercrombie & Fitch Stores, in which the Supreme Court recently sided with a rejected applicant who wore a hijab at her job interview. The woman might have been entitled to an accommodation for her hijab despite Abercrombie’s dress code, but neither side raised the topic during her interview, Samaha notes. “Silence is the enemy of accommodation,” he says. “People are struggling to find constructive ways of discussing awkward topics like religion and disability. Employers are still guessing about their legal duties and liability risks. Hopefully a project like ours will help stimulate productive thinking.” While the bulk of their article deals with dynamics between two parties, A and B, Samaha and Strahilevitz found they also needed to consider a third scenario: A asks for information about B from C, with C being big data. “The United States is in the midst of a ‘Reputation Revolution,’” they write, “where it is becoming easier for firms, governments, and ordinary people to learn a great many facts about any citizen, without ever asking that person a direct question.” They then discuss the implications of the rapidly expanding “Ask C” options for social norms and legal regimes. And what of Samaha’s keys? They really were missing, but, absent his research interests, he would not normally have asked family members so bluntly if they had taken them, with an accusation embedded in the inquiry. As Samaha saw it, he was venturing into the same “don’t ask, must tell” territory of marital infidelity, where a presumption of trust requires A not to ask B if there has been a transgression and B to disclose one if it occurs. While nobody seemed to take offense, Samaha says, “it didn’t feel right with me to be asking the question that way; I felt like I was acting against the norm.” But, he notes, his inquiry did produce the keys—it turned out that someone had taken them and forgotten. “It was a good reminder,” says Samaha, “that sometimes breaking norms that restrict information flows can be the best way out of an awkward situation.” Michael Orey