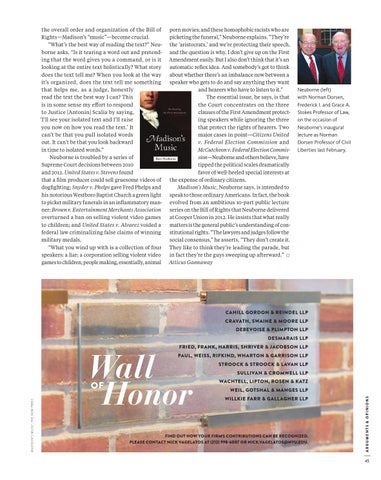 the overall order and organization of the Bill of Rights—Madison’s “music”—become crucial. “What’s the best way of reading the text?” Neuborne asks. “Is it tearing a word out and pretending that the word gives you a command, or is it looking at the entire text holistically? What story does the text tell me? When you look at the way it’s organized, does the text tell me something that helps me, as a judge, honestly read the text the best way I can? This is in some sense my effort to respond to Justice [Antonin] Scalia by saying, ‘I’ll see your isolated text and I’ll raise you now on how you read the text.’ It can’t be that you pull isolated words out. It can’t be that you look backward in time to isolated words.” Neuborne is troubled by a series of Supreme Court decisions between 2010 and 2012. United States v. Stevens found that a film producer could sell gruesome videos of dogfighting; Snyder v. Phelps gave Fred Phelps and his notorious Westboro Baptist Church a green light to picket military funerals in an inflammatory manner; Brown v. Entertainment Merchants Association overturned a ban on selling violent video games to children; and United States v. Alvarez voided a federal law criminalizing false claims of winning military medals. “What you wind up with is a collection of four speakers: a liar; a corporation selling violent video games to children; people making, essentially, animal

porn movies; and these homophobic racists who are picketing the funeral,” Neuborne explains. “They’re the ‘aristocrats,’ and we’re protecting their speech, and the question is why. I don’t give up on the First Amendment easily. But I also don’t think that it’s an automatic reflex idea. And somebody’s got to think about whether there’s an imbalance now between a speaker who gets to do and say anything they want and hearers who have to listen to it.” The essential issue, he says, is that the Court concentrates on the three clauses of the First Amendment protecting speakers while ignoring the three that protect the rights of hearers. Two major cases in point—Citizens United v. Federal Election Commission and McCutcheon v. Federal Election Commission—Neuborne and others believe, have tipped the political scales dramatically favor of well-heeled special interests at the expense of ordinary citizens. Madison’s Music, Neuborne says, is intended to speak to those ordinary Americans. In fact, the book evolved from an ambitious 10-part public lecture series on the Bill of Rights that Neuborne delivered at Cooper Union in 2012. He insists that what really matters is the general public’s understanding of constitutional rights. “The lawyers and judges follow the social consensus,” he asserts. “They don’t create it. They like to think they’re leading the parade, but in fact they’re the guys sweeping up afterward.” Atticus Gannaway

FIND OUT HOW YOUR FIRM’S CONTRIBUTIONS CAN BE RECOGNIZED. PLEASE CONTACT NICK VAGELATOS AT (212) 998-6007 OR NICK.VAGELATOS@NYU.EDU.