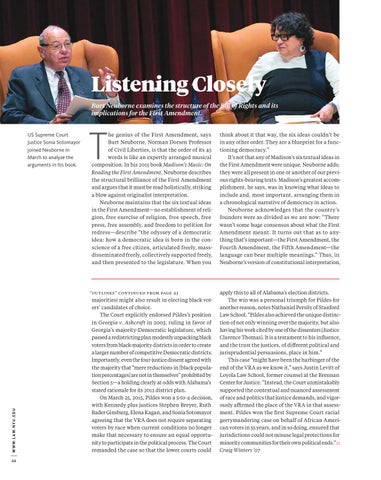 Listening Closely Burt Neuborne examines the structure of the Bill of Rights and its implications for the First Amendment. US Supreme Court Justice Sonia Sotomayor joined Neuborne in March to analyze the arguments in his book.

he genius of the First Amendment, says Burt Neuborne, Norman Dorsen Professor of Civil Liberties, is that the order of its 45 words is like an expertly arranged musical composition. In his 2015 book Madison’s Music: On Reading the First Amendment, Neuborne describes the structural brilliance of the First Amendment and argues that it must be read holistically, striking a blow against originalist interpretation. Neuborne maintains that the six textual ideas in the First Amendment—no establishment of religion, free exercise of religion, free speech, free press, free assembly, and freedom to petition for redress—describe “the odyssey of a democratic idea: how a democratic idea is born in the conscience of a free citizen, articulated freely, massdisseminated freely, collectively supported freely, and then presented to the legislature. When you

majorities) might also result in electing black voters’ candidates of choice. The Court explicitly endorsed Pildes’s position in Georgia v. Ashcroft in 2003, ruling in favor of Georgia’s majority-Democratic legislature, which passed a redistricting plan modestly unpacking black voters from black-majority districts in order to create a larger number of competitive Democratic districts. Importantly, even the four-justice dissent agreed with the majority that “mere reductions in [black population percentages] are not in themselves” prohibited by Section 5—a holding clearly at odds with Alabama’s stated rationale for its 2012 district plan. On March 25, 2015, Pildes won a 5-to-4 decision, with Kennedy plus justices Stephen Breyer, Ruth Bader Ginsburg, Elena Kagan, and Sonia Sotomayor agreeing that the VRA does not require separating voters by race when current conditions no longer make that necessary to ensure an equal opportunity to participate in the political process. The Court remanded the case so that the lower courts could

think about it that way, the six ideas couldn’t be in any other order. They are a blueprint for a functioning democracy.” It’s not that any of Madison’s six textual ideas in the First Amendment were unique, Neuborne adds; they were all present in one or another of our previous rights-bearing texts. Madison’s greatest accomplishment, he says, was in knowing what ideas to include and, most important, arranging them in a chronological narrative of democracy in action. Neuborne acknowledges that the country’s founders were as divided as we are now: “There wasn’t some huge consensus about what the First Amendment meant. It turns out that as to anything that’s important—the First Amendment, the Fourth Amendment, the Fifth Amendment—the language can bear multiple meanings.” Thus, in Neuborne’s version of constitutional interpretation,

apply this to all of Alabama’s election districts. The win was a personal triumph for Pildes for another reason, notes Nathaniel Persily of Stanford Law School. “Pildes also achieved the unique distinction of not only winning over the majority, but also having his work cited by one of the dissenters [Justice Clarence Thomas]. It is a testament to his influence, and the trust the justices, of different political and jurisprudential persuasions, place in him.” This case “might have been the harbinger of the end of the VRA as we know it,” says Justin Levitt of Loyola Law School, former counsel at the Brennan Center for Justice. “Instead, the Court unmistakably supported the contextual and nuanced assessment of race and politics that justice demands, and vigorously affirmed the place of the VRA in that assessment. Pildes won the first Supreme Court racial gerrymandering case on behalf of African American voters in 55 years, and in so doing, ensured that jurisdictions could not misuse legal protections for minority communities for their own political ends.” Craig Winters ’07